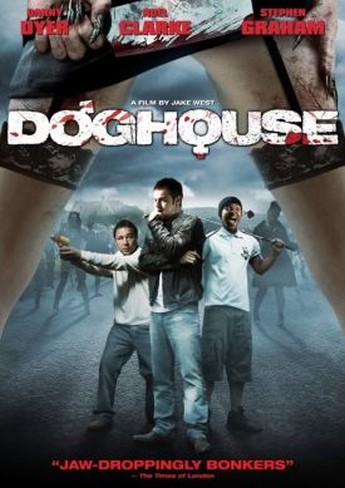 The term “misogyny” gets thrown around a lot concerning horror movies – most of the time, I’d say, largely without much justification. So it’s interesting to find this British genre entry, which seems almost proud to wallow in it, making women the actual monsters to be slain by men. Purportedly to cheer up the newly-divorced Vince (Graham), his friends organize a lads’ weekend away, in a house owned by the aunt of Mikey (Clarke). Only when they get to the rural dead-end in question, it’s curiously devoid of life. They soon find out why: something has turned all the local ladies into flesh-devouring zombies, who have wiped out the other sex wholesale. Even the army are having trouble containing the situation – particularly when the second phase of the mutation kicks in. One thing become clear to our merry band of drinking buddies. The only way out is not going to please Andrea Dworkin, because it’s going to involve an awful lot of violence against women. Dead is a Feminist Issue, perhaps.

After a brisk start, this demonstrates the laws of diminishing returns, because once the excellent central premise is established, West – or, more probably, writer Dan Schaffer – don’t have anything much more to offer. This could have been the setting-off point for a black satire on gender relationships: however, the scene with Mary in the garden from Shaun of the Dead had more to say on that topic, than this entire movie. Instead, the longer this runs, the more that aspect is forgotten, and it becomes a straightforward zombie flick, with nothing significant enough to distinguish it from all the other, straightforward zombie flicks. There’s little or no character development to speak of: for instance, particular crass and sexist Neil (Dyer) ends the film as crass and sexist as he started it. Speaking of the ending… It pretty much doesn’t. Instead, there’s something which feels like it’s going for Butch and Sundance, except the film already riffed on that earlier. It’s weak sauce, yet entirely fitting, considering you get the impression the interest in the idea of those involved waned in a similar way.