Probably for close to two hours, this hardly counts as a sequel to The Shining at all. Oh, the central character is Danny (McGregor), the now grown-up child who survived the events at the Overlook Hotel. But this is its own beast, focusing on his battle against a gang of nomadic psychic vampires led by Rose the Hat (Ferguson), who roam the country, eating the energy given off by the young shiners they kidnap and torture. Yeah, I didn’t exactly see that coming from the end of The Shining. Danny is still haunted by the malevolent ghosts of that experience, and has developed a technique to trap them. He has also a telepathic link with Abra (Curran), a powerful teenage shiner, who represents an open casino buffet for Rose and her pals. Together, they team up to turn the hunters into the hunted.

This is certainly a far more “standard” King adaptation than The Shining. Whether you consider that a weakness or a strength, probably depends on how you feel about standard King adaptations. There are elements familiar from previous examples, such as the memory hall of Dreamcatcher and lingering childhood trauma from It. This is considerably more conventional too, in terms of having a normal protagonist and antagonist, as opposed to its predecessor where Jack was arguably both, and likely more of the latter. It is also much less bleak emotionally; I cared about Danny, in a way I never did about his father. Flanagan has reinstated the theme of alcoholism, which had been a major component in the book version of The Shining, and was almost entirely excised by Kubrick. Interestingly, it also reverts to the ending from that book, rather than Doctor Sleep. 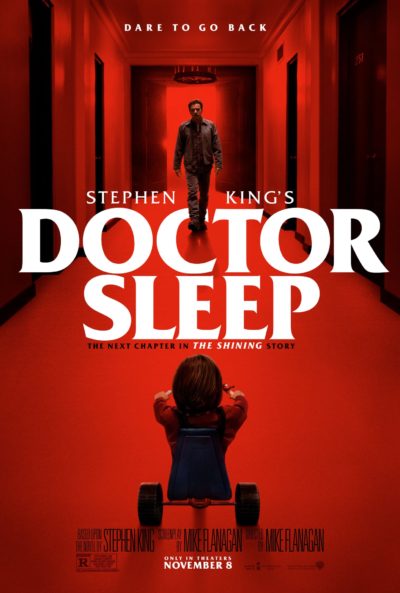 These modification may help explain why King was significantly happier with this version that Kubrick’s; it’s closer to the author’s original vision. [It’s not Flanagan’s first King-flick either, having previously made Gerald’s Game for Netflix] The conventionality works against it, unquestionably taking a safer approach to the material, without a sense of the director here as auteur. Admittedly, Flanagan’s career is considerably shorter than Kubrick’s at the point of his adaptation, so his style is still developing. But you could have listed a dozen competent, jobbing horror directors, told me any of them directed this, and I wouldn’t have been surprised. There’s a consistency of tone and approach here which makes for a satisfactory piece of entertainment: Flanagan delivers solid work, as do all the cast. Ferguson in particular makes for a good villainess.

It is also considerably less memorable. While not everything Kubrick tried to pull off in The Shining worked. when it did, the results stick in your mind in a way that little of Doctor Sleep probably will. This feels a safe, mainstream piece of horror, with any sharp edges filed off for a broad audience. It’s perhaps telling that Flanagan cut back the film’s most brutal sequence, showing Rose and her gang “feeding” on a victim. The director says it came on the advice of King during a screening, who “leaned over and he was like, ‘That’s a little brutal isn’t it?’ I was like, ‘Shit, I gotta go back, I gotta go back and edit this. I gotta pull stuff out.'” Now, pause to imagine Stanley Kubrick’s reaction to the same ‘suggestion’: the author would have been lucky to escape with his face attached. That perfectly illustrates the difference between the two makers, and their output.

Eventually, Danny and Abra lure Rose back to the Overlook Hotel for a final confrontation. This is where the true sequel aspects finally kick in: I understand the film’s reluctance to venture onto that hallowed ground. The production does a really nice job of reproducing the sets of the original – though it feels a bit implausible that all the lights work immediately, in a place which has been closed for forty years. [Less successful too, is Sleep‘s flashback footage, with the fake Shelley Duvall sticking out like a sore thumb] Having to tie together threads from the original book, an adaptation that went its own way, and a sequel novel, is a challenge, yet I’d say it’s one Flanagan largely pulls off. Treat Doctor Sleep as a separate entity, rather than as The Shining 2, and you’ll likely enjoy it considerably more.