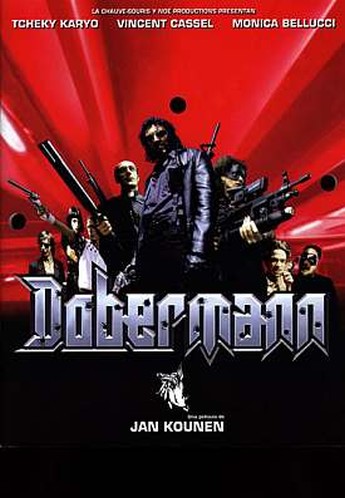 This frenetic action pic from France pits manic and charismatic criminal Yann Le Pentrec (Cassell), who got his first gun while being baptized and is known as Dobermann after the dog that also showed up that day, against Inspecteur Sauveur Cristini (Karyo), a serious hardass cop who has become obsessed with catching Dobermann. The two first butt heads after a complex scheme in which Dobermann and his posse of numerous thieves, attack a multitude of banks simultaneously, leaving the cops, and Cristini in particular, in the dust and humiliated. Cristini then gets a lead, in the cross-dressing shape of a transvestite hooker who leads a double life as a law student (!), and shows his true colours with an interrogation which will stop at absolutely nothing to get Dobermann’s location. That’s in the ‘Joe Hell’ nightclub, and so Cristini lies in wait for Dobermann to show up: when he does, he throws all his remaining resources to ensure that, in the words of Jim Morrison, no-one here gets out alive.

It’s very clear that Kounen wants to go completely over-the-top, right from the opening scene, which feature a CGI-animated dog-headed human, pissing on the credits and dissolving them. It’s also clear Kounen’s sympathies and interests lie with the bad guys, who get far more in the way of characterization – there are some endearing lunatics in there, such as the priest who uses what could be the Holy Hand Grenade of Antioch. However, you’ll find that the relentlessly nihilistic “attitood” on view gets old before the end, and when you know someone is just doing it to push buttons, it defuses any real shock value. As a result, much of the film has the impact of a kid yelling bad words at the top of his lungs: while it’s amusing to begin with, it soon ceases to have much to offer. Karyo makes the most impact, with a tightly-coiled performance as an absolute psycho, which occasionally reminded me of Gary Oldman in Leon. Yes, it’s that good. Otherwise, despite some impressive visual style, Shakespeare probably put it best: “A tale, told by an idiot, full of sound and fury, signifying nothing.”