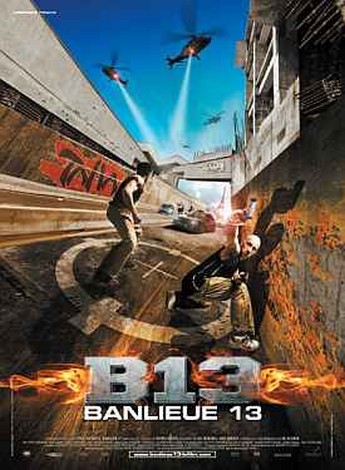 In an odd case of life imitating art, the suburbs of Paris – a main inspiration for the ghettos depicted here – erupted into violence and anarchy the following year. Perhaps fortunately for France, none of the gangs got hold of a nuclear weapon, as happens in this action flick. Cop Damien (Raffaelli) and an unwilling convict Leito (Belle) team up inside the lawless realm, each with their own agenda. Leito wants to rescue his sister, kidnapped by evil drug kingpin Taha (Naceri) in revenge for Leito destroying 20 kilos of drugs; Damien wants to find the bomb and defuse it before a large section of the City of Light become very well-lit. The main selling-point here is the use of parkour, the free-running urban sport developed in part by Belle, and shown to great effect in the first sequence, where Leito out-runs a pack of Taha’s goons.

Unfortunately, that’s really as good as things get; the rest of the action doesn’t suck, but is much less innovative, and the plot and characters are nothing to write home about either. That doesn’t make this a failure, however. The film has a breathless pace which ensures it’s never dull, and even if the basic concept rarely rises beyond the obvious, the execution is done with enough energy to overcome most limitations. Subsequent events, as noted, have given this a veneer of social commentary that I suspect was largely unintentional. Still, it’s another impressive genre entry from the French – see also The Nest; either they’re really good at this kind of thing, or only their best efforts are ever allowed an exit visa.