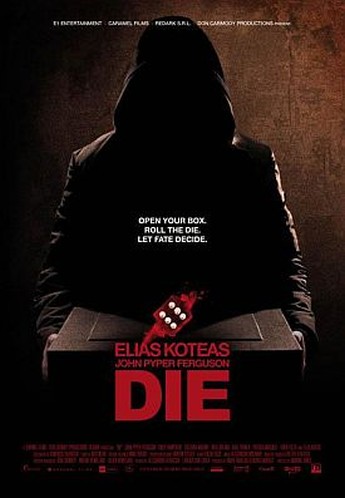 For much of the time, this seems like little more than a Saw knock-off, with a loony, Jacob, (Pyper-Ferguson) kidnapping people whom he believes don’t appreciate life enough, and putting them through a series of ordeals – the severity of which is, here, determined by rolling a dice. However, towards the end, the film suddenly makes a left-turn, as it turns out Jacon is merely the tip of the iceberg. I can’t say any more, but it’s such an interesting concept, it’s a shame the film-makers chose not to make this entire angle the main focus: it would have seemed much less a lame copy if they had done so. And I use the word “lame” advisely, since the kills here are certainly well short of the inventive sadism provided in the Saw series. It makes sense, since they aren’t really the point, but by the time you realize what is, your enthusiasm may have waned.

The film also leaps in and out from Jacob’s lair to a detective (Murino) investigating the case, who has noticed a number of suspicious “suicides” turning up with dots on their arms. She has a particular interest as her partner has also disappeared; he’s one of Jacob’s victims. However, it’s one of those convenient invesigations where she doesn’t do much actual investigating, and relies entirely on a book conveniently left on her door-step. The film would have benefited from simply sticking to its central premise, though the Italian locations are nicely used and I also enjoyed the score. The script is likely the main problem, which takes a potentially fascinating premise and comes up about two revisions and a re-ordering short of delivering on it.