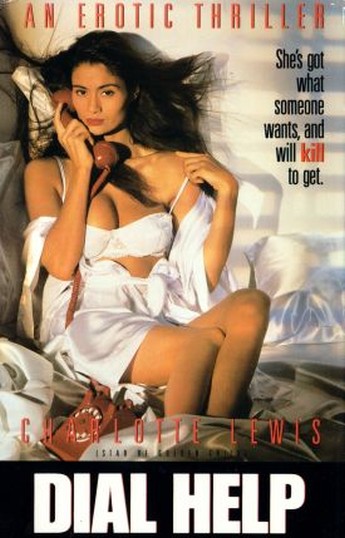 Man, this now seems so dated: it feels like a lot longer than 15 years since it came out. The main problem is trying to get your brain round the idea of a time before everyone had mobile-phones – and, worse yet, had to use public phone kiosks when they were out of the house. Man, that’s living foul. As such, and because landlines are an essential part of the plot, it’s as much a period piece as Phone Booth. Jenny (Lewis) is a model in Italy, who is being given the cold shoulder by her boyfriend. After dialing a wrong number – no, it’s not 867-5309 – she finds herself plagued by an increasingly-strange series of events, apparently focused on her phone line. She gets weird calls, her pet fish are exterminated, a telephone engineer friend is killed when he investigates, and when she’s attacked by a subway mugger, he’s pounded to death by a stream of tokens fired from the return slot on a nearby phone. WTF?

Yeah, get used to saying that, because it’ll crop up a lot during this psycho – in every way possible – thriller, from the director of Cannibal Holocaust. They seem to have made it up as they went along, and even when the scenes make some sense on their own, they fail completely to form any kind of coherent whole. For example, there’s one scene where the psychotic telephone [I think I may just have created a Googlewhack with that…] controls her apartment neighbour (Modugno) and almost compels him to commit suicide, since it perceives him as a rival for Jenny’s affections. Yet, this remarkable power is never used or mentioned thereafter. Similarly, the end has Jenny laughingly setting the phone system on her ex. Hahaha! However, none of this detracts from the entertainment value – and, it has to be admitted, neither does Lewis. Quite why she didn’t become a superstar in the nineties escapes me. Oh, hang on: her massive cocaine use. I’d forgotten.

Deodato appears to be going for a more Argento-esque approach, with some swooping camerawork, and also a frequent emphasis on women being menaced by pointy objects, ranging from scissors to syringes. However, the director here doesn’t have the overwhelming sense of visual style to overpower the logic deficiencies. Instead, it’s one of those films where you have to buy into the central concept and be forgiving of its logical looseness [or “babbling stupidity,” if you prefer. I wouldn’t argue with you there]; if you can do that, then you’ll have a fine time, watching Lewis stalked by a self-aware electronic entity, and left to dangle, upside-down and lingerie-clad, in a scene apparently channeled from an Irving Klaw photo-shoot. 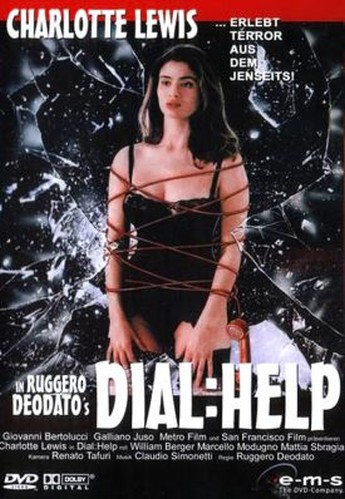 What we wrote then. A general rule of thumb in continental movies is that the prettier the actress, the looser her grip on sanity – if this has any basis in reality, it’s worth remembering the next time you contemplate a holiday romance. In any case, Euro-psychos form a distinct sub-class: the classic example is Beatrice Dalle in Betty Blue, a nose ahead of Isabelle Adjani, whose career almost seems to be based on psychopathy, and there’s barely an actress in France who hasn’t been warped at some point. While the French generally concentrate on femme fatales, with a healthy dose of revenge, the Italians, probably thanks to the influence of Argento and his crew, seem to prefer the supernatural aspects. This sub-genre allows the director almost to completely dispense with the plot, in favour of scriptual hand-waving about “the occult”. Only the Italians could possibly make a film about killer phones, such as Dial: Help. Jenny (Lewis) is a model who dials a wrong number and somehow – handwave, handwave – taps into a source of energy, which (understandably) decides to fancy her. It starts offing anyone it perceives as a threat or who is nasty to Jenny (I’m not sure which category her goldfish, who also get it, fall into) in a variety of interesting ways, most notably the mugger shot by high-velocity coins fired from the reject slot of a coin box.

Very little of this film makes any sense at all, yet the whole thing is really quite enjoyable. The improvement over the annoying plotlessness of Argento is that once you accept the premise – admittedly silly – of an intelligent, insane telephone number, the rest of the film is plausible, at least by comparison. Argento piles idiocy upon idiocy until even my disbelief can no longer be suspended. As for the female psycho, Charlotte Lewis starts off okay, but by the end is seriously cracking up. The final proof of this is her decision to dress up in stockings, suspenders and a black basque, purely to roll around in the bath for five minutes. While this casts doubts on her character’s sanity, it proves that director Deodato knows how many beans make five. The entire scene is completely gratuitous, adds nothing to the story, and is quite, quite wonderful. [And, thanks to the Internet, a section can now be found below, replacing the grainy screenshots!] B+