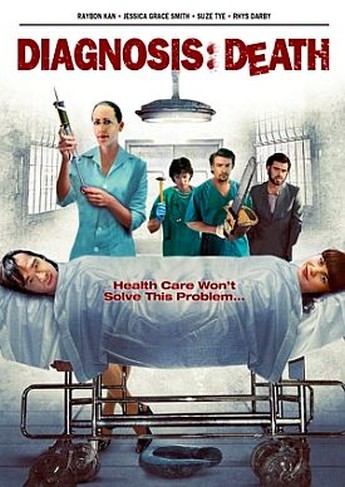 This New Zealand film is all over the place in terms of genre. It centers on two terminally-ill cancer patients, ladies’ man Andre (Kan) and high-school student Juliet (Smith), who both agree to take part in a trial of an experimental drug, as their last hope of survival. The trial is taking place at a former mental hospital, under the wary eye of veteran nurse Margaret Bates (Tye). It turns out that the location, in its former incarnation, was also the place where Juliet’s favourite author, Charlotte Mansfield, killed herself after drowning her son, some fourteen years previously. The test starts, and both Andre and Juliet soon start seeing and hearing ghosts around the facility. While initially writing these off as side-effects of the drugs, which Bates has told them will cause hallucinations, Andre is led to find Mansfield’s last work, hidden in an air-duct. He and Juliet gradually realize that there was a lot more to things than the official account, and resolve to find out the truth behind what happened to Charlotte and her son.

Seems it’s got cameos from the people behind Flight of the Conchords, but having never had the slightest interest in seeing a single episode of that, I neither noticed nor cared, so moving rapidly on. As noted, it’s difficult to pin this into a genre, and the lack of being one thing nor another may irritate some: horror fans, for example, won’t find it horrific enough. However, if you enjoy quirky comedy with a dark streak as well, this is more likely to be up your street: there are some great lines and speeches here, such as Nurse Bates’ introduction to the participants, touting the patients’ lounge with its “free-to-air” TV. There are some plot weaknesses, such as the way the ghosts have or don’t have a physical presence, and how Juliet and Andre’s visions conveniently dole out information at exactly the speed needed for the story. But they are an engaging pair of characters, with their own foibles, that it’s no chore to spend time with them as they unravel the mystery. We knew little about the movie going in, and the lack of preconceptions probably helped appreciate its off-beat charms.