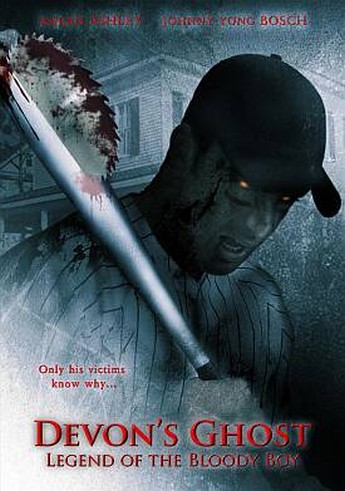 If there’s such a thing as a family-friendly slasher pic, this is it. Some blood, but not too much; little nudity or bad language; and starring two former Power Rangers. Almost wholesome entertainment, though don’t expect the Disney channel to show a film, where the villain wields a baseball bat with a circular saw blade embedded in the end. In Canyon City, there’s a decade-old legend surrounding the death of Devon, a young kid, and the subsequent murder of his parents. Now, someone appears to have released the evil, and the body count is rising. Can Symphony (Ashley) and Josh (Bosch) solve the mystery before they, too, fall victim to…the Curse of the Bloody Boy!

The start is particularly wobbly: characters and dialogue are cliched enough to make you root for the psychopath – and with names like “Freedom” and the previously-mentioned “Symphony”, it’s like they pulled them from a dictionary. When the talk stops and the screaming starts, things improve significantly, though the martial arts is something of a surprise [at least if you don’t know genre veteran Sakamoto, who worked on the immaculate Drive] and never well-integrated: cops who’d rather punch than shoot? But as you’d expect from Sakamoto, it’s well staged, and for an unstoppable foe, Devon’s ghost is effective enough. This mongrel cross between two exploitation standards – kung fu and stalk/slash – ends up putting a credible foot in both camps.