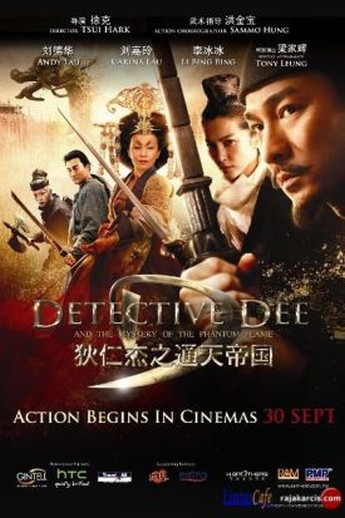 Preparations for the coronation of China’s first ever Empress (Carina Lau) are under way, including the construction of a massive Buddha statue, when two officials involved in the project die, both apparently combusting spontaneously. After a visit from a talking deer(!) warns of dire consequences, the Empress releases Detective Dee (Andy Lau) to investigate – he’d been imprisoned eight years previously, for rejecting the Empress’s authority as regent. With the help of her attendant Jing’er (Li), Dee digs in to the case, and finds a lot of people with potential motives, due to their resentment of the Empress, and is also reunited with the chief builder, Shatuo (Leung), who had previously been Dee’s ally in the rebellion, and had his hand chopped off as a result. Were the deaths divine retribution, as some people claim, or is there a more mundane motive for them?

Part of the appeal of HK cinema was the ability to create an alternate universe with a striking physicality, such as using wires to achieve the illusion of flight. There’s precious little of that here: instead, there’s a huge amount of CGI, and it’s CGI of a far from perfect quality, to the extent that it acts more as a distraction than an enhancement. It’s a shame, because I like the “historical detective” angle, which feels a bit like The Name of the Rose, Dee using a mix of psychology and science which has a lot of resonance today. There’s no denying the spectacle here, not least the statue itself, which is an epic creation that feels even bigger than it is. But the action generally feels more like a break from the more cerebral pleasures: if the individual shots therein make sense, the overall impact is almost entirely missing: Li’s complete lack of experience in martial arts is painfully apparent. Both Laus are good in their roles despite Dee occasionally wearing a hat that appears to have been borrowed from a Smurf: it’s just a shame they are stranded in a backdrop more Playstation 3 than Cinema 3.