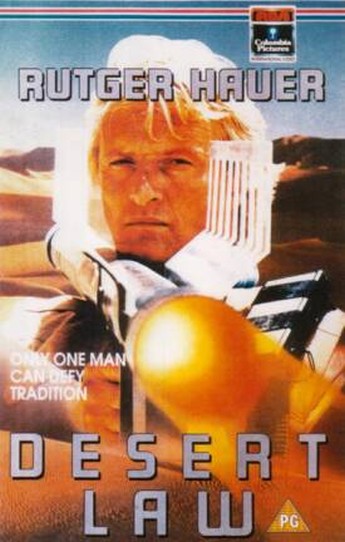 I’d completely forgotten that I’d seen this before – fifteen or so years ago, under a different title. It clearly made no impact on me then, and if it’s another fifteen years before we see it again, we won’t mind. I do look upon it slightly more kindly than I did originally. How bad can a film be, when it has Hauer wielding a Stinger missile and saying, “Go ahead – make my day.” Well, the answer is still pretty bad, even in the edited, 108-minute version endured viewed on this DVD. Hauer plays a mercenary, brought in to rescue the son of a corporate executive (Alt), who has been taken off to the North Africa by his estranged father (Bedi). But, instead of what should have been an exciting action-adventure, tedium ensures in a pool of badly-choreographed action, half-cooked dialogue and characters that might have aspiration of being half-cooked some day.

Perhaps the only interesting aspect is the arc of the Arab characters: at first it seems that they are irredeemably evil, but first the kid’s father, and then his grandfather, turn out to have more depth and humanity than initially suspected. However, this transition is so clumsily handled as to be useless, Despite an above-average cast, the script doesn’t allow them the latitude to bring depth to their characters, with even Hauer sadly hamstrung by pedestrian writing and clumsy direction. While the Moroccan landscape adds some much-needed grandeur to proceedings, it still can’t salvage a movie that limps along, even in this truncated form, for a good twenty minutes longer than is necessary or desirable. When I told Chris I found out that I’d seen this before, her wrath was terrible to behold: “And you still made me watch it?” All I can say is, sorry…

What we wrote then: [supp.to 11] Past experience of PG-rated films has shown they tend to be utter cop-outs, shorn of any redeeming sex or violence; I possess less ‘PG’ tapes than any other category, and more than half of those star Emmanuelle Beart or Nastassja. This film is a salutory lesson, being an Italian TVM (complete with obvious ad-breaks, co-scripted by George Eastman), that runs out of ideas fast and seems twice as long as its 140 minute running time. Even Hauer can’t salvage it, though his character is easily the best thing in this awful cross between Not Without My Daughter and The Desert Rats. I really can’t recommend this film, except possibly if you’re looking for unfunny racial stereotypes. E-