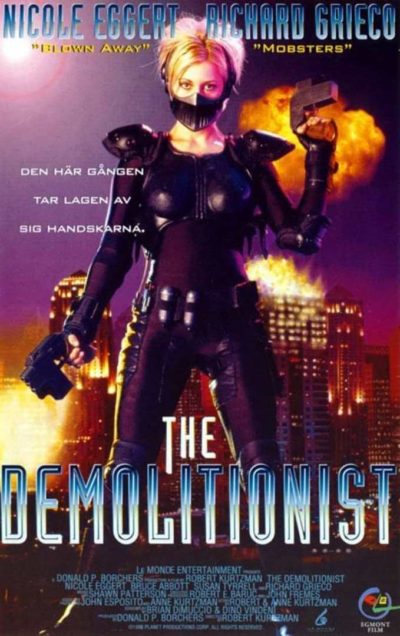 [22] The special effects firm of KNB (Kurtzmann, Nicotero and Berger) have been involved in many genre classics, for example, ‘Evil Dead 2’ and ‘From Dusk Till Dawn’. But have they learned anything about film-making? This film is a femme-fatale version of ‘Robocop’, with Nicole Eggert as the resurrected crime-fighter, taking on Richard Grieco and Tom Savini. It’s very cheap, the total budget was a mere one million dollars, and you can tell from the lame climax that the money ran out – plans for a massive Savini/Eggert sword fight went by the board.

For the most part though, it doesn’t show too badly, with at least the FX being up to scratch, as you’d expect. While we ain’t talking Dostoevsky, you get lots of cool firepower, blood squibs that explode in clouds of pink dust, and Eggert in an incredibly tight costume. Could have been much worse, really – at least in the American version, as the BBFC were impressed enough to cut out four minutes.