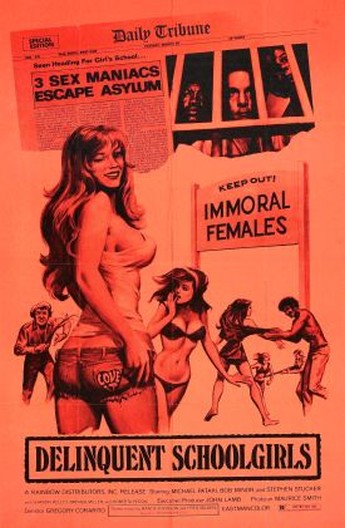 This grindhouse feature has three men locked up in an “asylem” [that’s the spelling on the gate!] for the criminally insane. There’s Carl (Pataki), a crap vaudeville entertainer driven mad after losing a booking; “Big Dick” Peters (Minor), a former baseball player with a history of indecent exposure; and a “latent homosexual” (Stucker), who really doesn’t seem very latent at all. They escape from the lunatic asylum, and their route to escape eventually brings them to the Oxford Corrective Institute for Young Women, where a small group of the inmates/pupils are spending their holidays. Being basically starved of all credible male attention – the principal is creepy, and the biology teacher prefers to hypnotize the girls into a trance before molesting them – the arrival of the escapees is greeted with surprising enthusiasm, at least until the more sadistic side of their personalities starts to show up. Fortunately, the girls were in the middle of receiving self-defense lessons, and now get to put their new-found skills to good use.

When a version of this called Delinquents – already cut by half an hour – was submitted to the BBFC in 1986, Jim Ferman demanded a further ten minutes be excised. Which must make it one of the most heavily-edited films in British censorship history. I can see why: the sexual assaults here are played in a cheerfully light-hearted manner, with most of the victims ending up entirely happy with the experience, which must have made Ferman’s head spin. Then again, part of the theme, at one point explicitly stated, is that the lunatics aren’t really significantly worse people than those on the outside; one particularly bizarre scene has them bonding with the husband of one of their victims, ending in a rousing chorus of Old McDonald had a Farm.

It’s the kind of weird, out-thereness which I love to see, although the rest of the film doesn’t quite reach the same surreal level – I did like the scene where Peters, who’s black, goes nicely against type by rejecting an offered slice of watermelon. Most of the “schoolgirls” are generic bimbos of no particular note, though Kelly [who was 25 when this was made, hence the quotes!] makes some impression as flame-haired Greta, played SuperCherry in Supervixens the same year, and would go on to a successful eighties porn career as Colleen Brennan. All told, the sleaze here hasn’t been diminished by the passing of time, and the more outrageous elements help make this one stick in the mind rather more than many from its era.