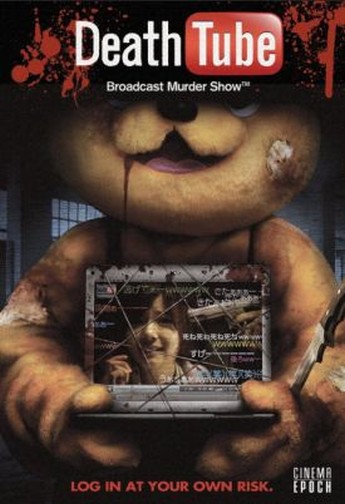 Inouye (Matsuda) watches an Internet snuff site, which offers both pre-recorded and live deaths to viewiers. But he wakes up the next morning to find himself, along with seven other fans, its latest participants. Initially held in separate rooms, they are able to see each other through computer screens, as the world outside watches and comments cruelly on their performance. They are given various tasks, often little more than party games, which whittle down the numbers. But it seems clear that there is some kind of twisted moral philosophy at play here, with life lessons to be learned from the giant plush teddy that is orchestrating proceedings, for reasons unknown. As the body count increases, the remaining players (mostly young and suitably photogenic – a couple are idol singers) are forced to confront some rather unpleasant truths about themselves.

While an engrossing idea – clearly inspired by Saw, but also tapping into the depressing view of humanity found among, for example, YouTube comments – it doesn’t manage to deliver on its promise, and also never addresses the inherent contradiction. A movie that could reasonably be classed as torture porn, really doesn’t have much of a moral leg to stand on, when it comes to being critical of those who get their kicks from watching violence online. The hypocrisy would be forgiveable, if it actually delivered some imaginative or interesting kills, but there’s no escalation here, with too many succumbing to things like coughing up a bit of blood after they’ve been poisoned. The film focuses on Inouye, but he’s really not a great character, with little in the way of depth or interest. I did appreciate the twisted sensibility on view, with the site’s logo perilously close to its large, litigious siblings, and some good use of well-known classical tunes. However, at close to two hours long, it isn’t enough to merit more than passing attention.