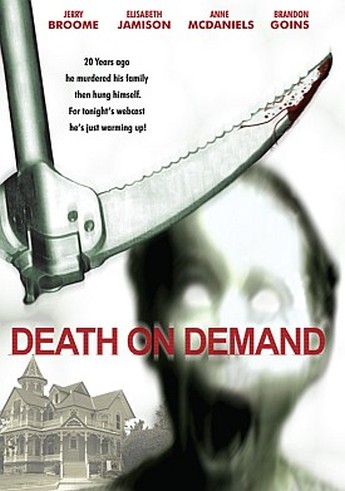 Was it really back in 2001 that Cradle of Fear breached the topic of death broadcast over the Internet? Not that you’d know it from this film, which apparently believes the idea of a webcast covering a night in a supposedly-haunted house is novel or original, rather than tired and over-used. Here, three pairs of college students are on a treasure-hunt inside the home where, 20 years ago, a psychotic mountaineer(!) murdered his whole family using his equipment, then hung himself. Wisely, the six contestants [number off those cliches – jock, porn starlet, blonde, geekette, Tarot card reader and hero] start with a seance, and it’s not long before the spirit of the killer is stalking them through the locked house, as the broadcast producers observe through their cameras. Actually, when I say, “not long,” I mean “far too long.” The pacing is what wrecks this. After the opening killings, it’s more than 50 minutes before any more blood is spattered – and, believe me, these are not characters with whom you want to spend any time.

The jock (Goins), in particular, had us begging the movie to kill him off, with every line of dialogue he murdered. The rest of the cast aren’t much better, though only the geekette was bad enough to trigger actual homicidal impulses. Darla, the card-reader (Jamison) is the best of the bunch, with occasional flashes of personality in her performance, that stand out in contrast to the rest of the participants. The film does – and this can’t be called a spoiler – start to kill people off, in ways that suggest the main inspiration was a trip to an outdoors store and the ensuing revelation, “Gee, mountaineering equipment would be great for slaughter.” Ice-axes, crampons and things I don’t even recognize are all used, to varying, occasionally impressive effect. Though the most horrific things in the entire film are likely Grotte’s fake boobs, and the carnage is too little, too late to revive interest.