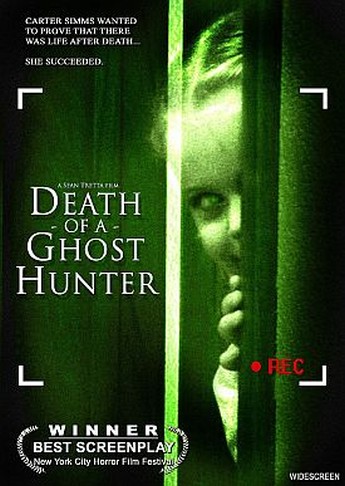 Sceptical ghost-hunter Carter Simms (Tindall) travels to Oregon to investigate an allegedly haunted house, where a woman committed suicide after discovering the bodies of her murdered family, 20 years previously. She is joined in her research there by journalist Yvette (Joy), videographer Colin (Marsh) and a representative of the family’s church, Mary Young (Page), who soon turns out to be fairly unhinged. Initially, things in the house are quiet, but it’s not long before things start to happen: cold spots appear in the house, voices and other sounds are heard on tape-recordings, furniture moves of its own volition, and the video-cameras set up around the residence start to pick up inexplicable images. Is there a rational explanation, or is this the evidence Simms doubted she’d ever find, proving the existence of life after death.

For a quick, cheap, B-movie, it’s not bad, though the audio mix is terrible, rampaging from far too quiet to “bleeding from the ears” level, and as a result you’ll spend as much time fiddling with the remote as getting caught up in the story. The film was on shaky ground early on, with an inordinate amount of voice-over; I know it’s based on Simms’ journal, but still… Also, the title is badly-flawed: it absolutely gives away the ending, so there’s basically no suspense, and you spend 100 minutes waiting for the promised fatality. The ‘cuckoo in the nest’, and who they were, was also highly obvious, virtually from the first time they appeared. A single phone-call – certainly the sensible thing to do in the circumstances – would have exposed them immediately.

Still, “sensible” and “characters in horror movies” don’t normally fit together, and once it gets going, it isn’t too bad. There are no shortage of creepy moments, though I think Chris’s spine was more affected by those than mine. The film does have a good handle on the paranormal aspects, referencing a lot of things that will likely be familiar, even if you’ve only watched an ep of Ghost Hunters International [or as we have, just rolled our eyes at the trailers, as they promise to investigate the ghost of Robin Hood…] And even if, as noted, we knew where it was going, the finish was likely the best thing about the movie, tying up the loose ends, yet leaving us facing the unknown. While this premiered almost simultaneously with Paranormal Activity, it will probably seem a bit derivative if watched now. However, if you keep your volume control handy, it’s a decent enough effort, given the obvious resource limitations.