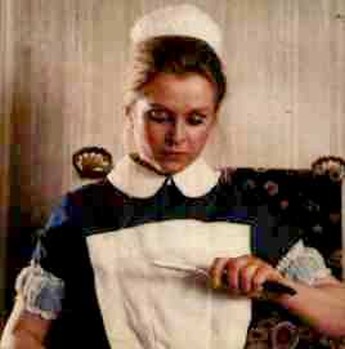 This curious 70’s British film eschews plot in favour of sequences which depict in lengthy (and, if truth be told, somewhat tedious) detail, the murders committed by an agency of hit-women run by middle-class antique dealer Reed. While you learn more than you need or want to know about the victims and their background, there’s almost no information on the assassins. How are they recruited? Why start such a business? Where do they get their clients? Evidence suggests they advertise in the press – which surely raises more questions than it answers.

The frequent flashes of violent newspaper headlines suggest some kind of social commentary about the times is being made; a quarter of a century later, it goes to show how every era feels it is the most violent ever. The digs at class retain their relevance better, notably the man who speaks entirely in Daily Telegraph cliches, and the woman whose sole reason for living appears to be to keep her house tidy. The only name you might have heard of is Rula Lenska, who bookends the film as what would appear be an independent serial-killer. It’s all very strange, and so British you expect Penelope Keith to turn up – yet is not without charm.