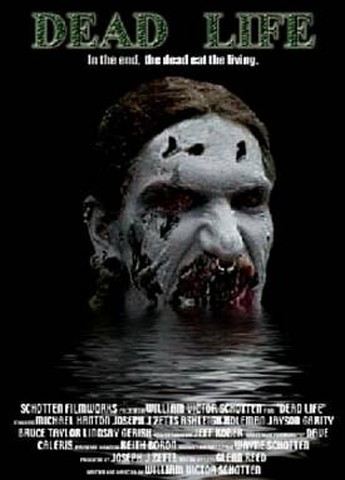 While the zombie has undergone a renaissance at the theatrical level, they remain a staple for low-budget horror film-makers too. Out of Ohio comes Schotten, who has made this loving, if not entirely successful, throwback to the 1970’s style of horror. Shot either on grainy film or video treated to make it look like film – I’m not sure which, but it’s a nice touch, either way – it’s the story of a group of friends who find themselves the only ones in town uninfected by an illness that kills its victims, then brings them back to…well, Dead Life, I guess.

There are certainly plenty of weaknesses: at the start, it’s mind-numbingly uninteresting, and the low budget is often painfully obvious, not least in zombie makeup that resembles a bad face-pack. However, Schotten has some interesting tricks in his bag, and just when you’re about to switch off, he’ll pull something neat out, and keep you watching. And when the plague hits its stride, things perk up as our steadily-diminishing band of heroes head for the desert. There are nods to NotLD in the media bulletins and obligatory downbeat ending – being honest, about the only original concept here, is the idea that zombies’ violent behaviour is learned, not instinctive. The rest, despite Schotten’s laudable efforts (and a scene featuring sex with a zombie!), is really not likely to remain in your memory for long.