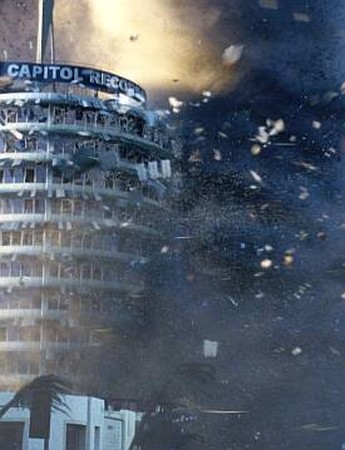 Rarely has a film so perfectly lived up to expectations. Not that this is necessarily a good thing, since we went in expecting cardboard characters, a cliched plot and laughable dialogue, and were not disappointed. However, we also went in anticipating the vigorous delivery of spectacular destruction, and the movie hits the mark there too. Looking through the press stills – few have the actors as anything more than a marker to indicate scale – it’s clear where the enthusiasm lay in this project. A sudden climactic change leads to tornadoes in LA, a tidal wave in New York, and a new Ice Age across most of the Northern Hemisphere. Scientist Quaid has to trek up from Philadelphia to NY, in search of his son (Gyllenhaal), stuck there on a school trip.

This is a thin excuse for some really cool effects sequences that are impressive on just about every level. Unfortunately, the way the story is structured, the best stuff happens well before half way, abandoning the rest of the film to the humans, who are definitely not up to the task. It’d take a better actor than Quaid to deal with what he’s given, and Gyllenhaal makes no impression at all. The only one to come out with any credit is Holm, another scientist trapped in a snowstorm, who does bring some dignity to proceedings. Otherwise, by all means see it on the biggest, loudest screen you can. Then, forget about it entirely.