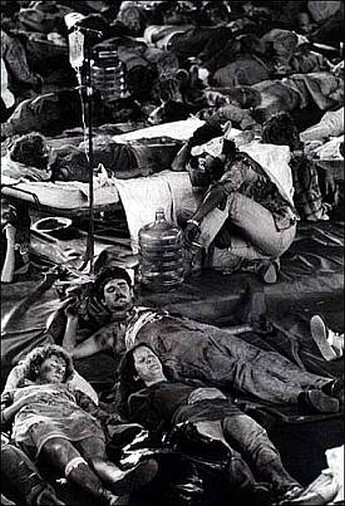 It’s probably difficult for this generation to grasp that there was a time when the nuclear threat was not some terrorist setting a bomb off in Manhattan, but a full-on, all-encompassing apocalypse involving the entire world. But that’s how things once were; we didn’t have a Cuban Missile Crisis, but for much of the 1980’s, atomic Armageddon was a constant dark cloud on the horizon. This 1983 TVM is perhaps the most famous depiction of the fears of the time, showing an escalation of tension, leading to a full exchange of missiles, and the nightmare of life in rural Kansas. When originally shown, there were no commercials after the bombs dropped – partly a creative decision, but partly because few advertisers wanted to buy time – and nearly 100 million viewers watched, a then record for a TV movie.

The film freely admits in an endnote that the real thing would likely be much worse, and the restrictions of network television are obvious. That said, after a shaky start more akin to soap-opera, Meyer still produces a work whose power is undeniable. However, its point is more questionable; after a while, it’s like being hit on the head repeatedly, with a sign saying “War is bad, mm-kay?” You yearn for something more than another tragic waste of life, and much of it is largely redundant, with the final scene more effective than anything in the final hour. Robards is impressive, but the typical TVM desire to try and tell multiple stories lessens the overall impact. Twenty years later, it feels as much a period piece as any 50’s paranoid thriller.