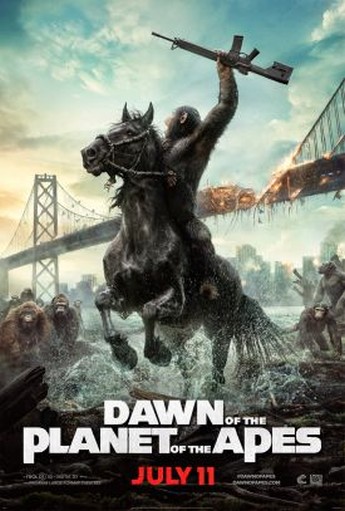 The title feels like it should be the first of the series, not the second. But then, I never Rise before Dawn. Hohoho. With that (fortunately) disposed of, while the story moves forward, this seems to reprsent something of a step back cinematically. Ten years after the simian flu outbreak, described at the end of the original film, humanity’s numbers have been reduced to a fraction of one percent, but the apes who escaped from captivity have gone from strength to strength. A posse of survivors in San Francisco send a group out to see if a hydro-electric dam can be re-activated, to provide urgently needed power, but encounter the simians, who have created their own city in the forests under Caesar (Serkis). The humans are split into two camps in regard to dealing with their new neighbours: Michael (Clarke) favours a diplomatic approach, but Dreyfus (Oldman) is a “hawk”. The apes are divided similarly, with Caesar’s deputy, Koba (Kebbell), seeking revenge against all humans for his mistreatement at their hands.

I think it may have been a mistake to split the focus of the film between the two sides: what we see is, in many ways, a mirror-image, and while that may be the point, it leads to a certain duplication of effort. On the simian side, the story is told through a mix of Ammerican sign-language and kindergarten-level speech, neither of which are very effective in terms of drama [there’s certainly nothing which comes close to matching the wallop packed into Caesar’s single utterance in the preceding film]. The human performances behind the monkeys and apes, led by Serkis, are as good as in the first, and the desolate streets of San Francisco are very eerie – particularly when occupied sole by primates. Wielding guns. On horseback. But it has little or no nuance of character: you can tell the ass-holes, both human and primate, about 10 seconds after you meet them, and there is almost no development thereafter. There’s still a lot of scope for the universe created, however; let’s hope this is just a case of second movie syndrome.