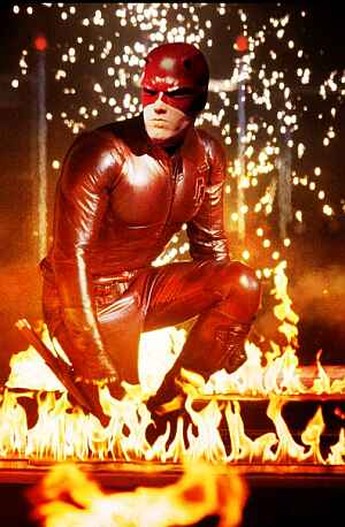 Let’s hope this isn’t indicative of the slew of comic-book films due out in the rest of 2003, for it’s pretty lacklustre stuff. Technically, it’s not so bad, though the neat way of showing the hero’s super-vision is overused. It’s the acting, and Affleck in particular, that stumble badly, though they can hardly be blamed for a script which brings precious little that’s new to the table. Kid suffers freak accident, gains powers, loses relative, hangs out with love interest during torrential downpour. Writer/director Johnson must be the only person on the planet who didn’t see Spiderman. And how the hell does someone whose only previous feature experience was 1998’s Simon Birch – no, me neither – get handed a $75m movie?

The only person who seems to be having fun here is Colin Farrell as Bullseye, who cranks up the volume on his acting to appropriately comic levels. He is fabulous, and almost drags the film up single-handed. Neither Duncan nor Garner are given sufficient to do, the latter particularly wasted in a lame, tame version of Elektra, a character who deserves much more attention and effort than she gets here (I’m gonna read Elektra: Assassin again, just to remind me of the missed potential). But Affleck is the worst offender, failing to put across any significant emotion or depth. Some flaky CGI also hurts, especially in the organ battle – in case you’re wondering it’s atop a church organ, rather than involving them hurling spleens at each other. While that would probably have been more fun, it’d be too much imagination for this film to handle.