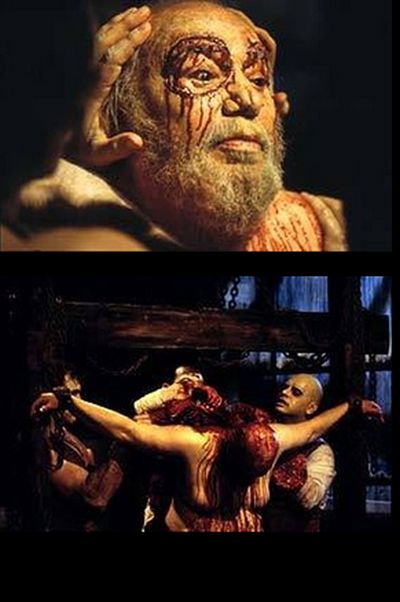 It may have taken long enough, but finally Gordon goes back to H.P.Lovecraft, source of his finest works. This isn’t on a par with Re-Animator, or even From Beyond, but does offer a nicely Cthulhu-esque sense of menace, some startling moments and – probably not a spoiler – no cheerful, happy ending. Against this, it’s hard to like the hero, an important supporting character has an appalling grasp of English, and the finale is more like Lair of the White Worm than the Wicker Man it wants to be. It starts interestingly enough, with a boat shipwrecked off a Spanish village; before you can say ‘Esoteric Order of Dagon’, the hero is being chased round the town by mutants in a highly creepy manner. The glimpses you get of his pursuers are just enough to disturb, though if I ever start an evil cult, I will not leave volatile chemicals lying around in large drums marked ‘INFLAMMABLE’.

Eventually he bumps into the only “normal” local (Rabal), possessor of an accent so thick you’ll be desperately seeking subtitles. The plot grinds to a halt here for a needless history lesson; in truth we don’t really care about why the locals are the way they are. It never quite gets started again, and as Lovecraft goes, it’s more The Shadow Over Innsmouth than the story of the title. There is one fabulously nasty face-ripping, and the local high priestess looks like Christina Ricci (from above the waist, at least…), but nothing can compete with the Lurking Horror which is A Spanish Hotel Bathroom.