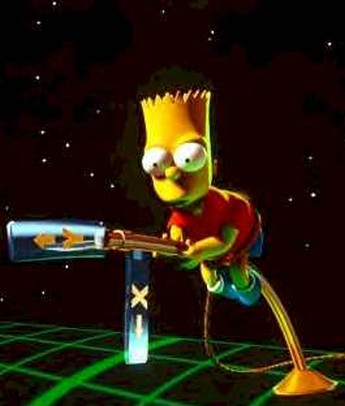 The latest 3D film from Imax is an effective piece of eye-candy, but no more. There’s little beyond a disjointed series of clips linked by a cyberhost, voiced by Elfman, who battles code bugs with annoyingly fake accents (Frewer is one) round an animation galleria. The overall effect resembled Disney Time: I kept wanting the clips to go on, and the interruptions to cease. These include sections from Antz and The Simpsons, re-rendered into a 3D format; if the latter is the best section, it’s probably down to the writing rather than any technical superiority, and there’s an important moral there. As elsewhere, the mix of cel animation and CGI is jarring, with all the time and effort clearly having gone into the latter. Some of the computer sequences are certainly stunning, creating enough of a sense of motion to leave poor Chris a little queasy on occasion. But I just can’t help wondering about the wisdom of Intel plastering their name across a film, which relies upon technical cock-ups and poor tech support for a plot, and suggests all such problems can be cured by rebooting. Hmmm…