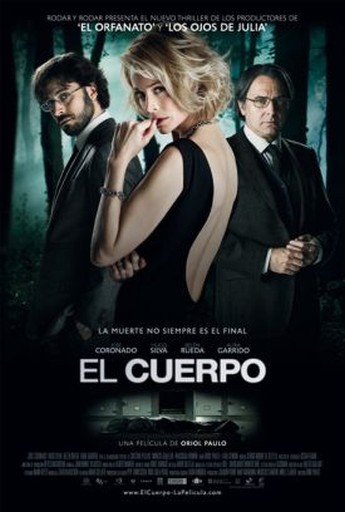 The night guard as a morgue is run over, apparently running away from his post. Investigation by Inspector Pena (Coronado) soon discovers a missing body, that of Mayka Ulloa (Rueda), the recently-deceased millionaire wife of Alex (Silva), killed by an apparent heart attack. I say, “apparent,” since it soom becomes clear Alex poisoned his wife with a toxin that causes cardiac arrest, but isn’t detectable, in order to start afresh with his mistress (Garrido). Of course, the sudden disappearance of the corpse focuses attention back on him, but can Pena prove wrongdoing after bringing the husband back to the morgue for questioning? And where did the body go? Because someone is tormenting Alex with an escalating series of notes and other hints, indicating they know the truth about what happened. Was the murder plot as successful as he thinks? Or is someone else seeking to take advantage of the situation?

This is a beautifully-written script, which builds on its intriguing premise and gives you all the pieces of the puzzle – though it’s highly unlikely you will be able to put everything together, before things fall into place. Both the red herrings and the clues are slid across the viewer’s perception with equal weight: for instance, is Mayka’s fondness for cruel pranks significant? However, this is also backed by solid performances from the cast, who succeed in making their characters human, even as they all seem to have darkness in their past – or present. There are occasional spots of contrivance e.g. the morgue appears to be lit by 20-watt bulbs for no reason beyond spooky atmosphere, and the cops stay there far beyond what’s truly plausible. However, these flaws are ones I’m willing to forgive in the spirit of overall cinematic entertainment, and the film more than delivers on that score.