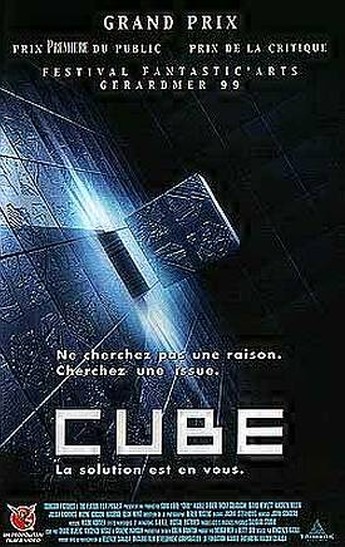 Take a bunch of people, put them in a maze of interlocking cubes, some booby-trapped, and let’s see what happens. That’s the basic premise of this cheap (a single set, no stars) Canadian pic, which is one of the more intelligent films of 1998. Mind you, up against cerebral pygmies like Armageddon, that’s not much of a compliment. While the characters are fairly two-dimensional and cliched, there’s enough going on to keep you intrigued, and the director keeps the tension bubbling nicely.

The complete refusal to explain anything is simultaneously interesting and annoying — it feels a bit of a cop-out. Between this and Lexx, it seems that Canada is the current home of quirky SF with a brain, even if Cube comes off as an intellectual exercise as much as a movie. Not quite cinematic enough to justify making the effort to catch on the big screen, yet definitely worth a look when it appears on video.