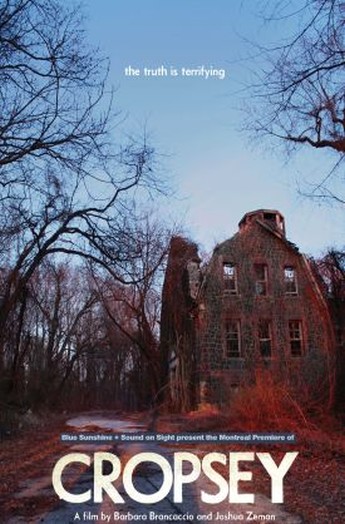 Occupying an odd ground between crime documentary and urban legend, this is set on the New York borough of Staten Island, around the Willowbrook State School, a notorious institution whose appalling conditions gave tabloid journalist Geraldo Rivera his first big break in 1972. It became home to the legend of Cropsey, a supposed former inmate who continued to live in the tunnels beneath the facility, coming out to abduct local children. Maybe he had a hook. Or not. Still, life seemed to imitate art, when a 12-year-old vanished, and her body was found near a campsite inhabited by former Willowbrook employee, Andre Rand. He was arrested, charged with kidnapping and sentenced to 25 years. More than a decade later, he was charged with another disappearance, this one dating from the early seventies. Was Rand a real-life Cropsey – even though he didn’t actually have the hook…

From there, the film moves more in to traditional areas, as the question of Rand’s innocence or guilt is explored. Was he a predator, or just a convenient scapegoat, who fitted many of Cropsey’s attributes? The problem is that there’s no great revelation: expecting such would be too much, but any sense that Reed might be evil personified, is entirely defused when you see him drooling as he is taken into custody. It’s less interesting than the more extreme stuff brushed against as the documentary makers explore the subject such as an odd, never quite adequately explored diversion into Satanism and human sacrifice. The results are occasionally creepy, to be sure, but growing up, I didn’t have anything like the legend in question, and it seems to assume that you did, and so are on the same page. It doesn’t provide the level of “disturb” for which I had hoped, though if Staten Island was ever on my list of holiday destinations, it is there no longer.