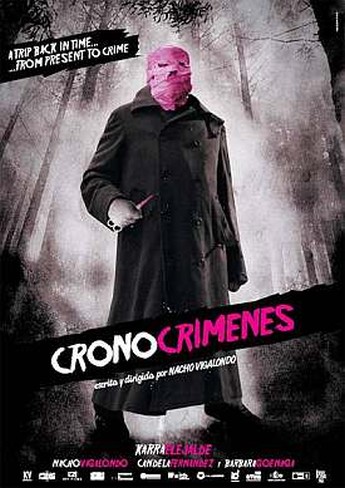 Maybe there’s some kind of cultural filter going on here, but it seems like every Spanish thriller I’ve seen of late has been a pleasure to watch, mostly because of the meticulously-constructed and interesting script. This is another small gem: Hector (Elejalde) is enjoying a sprawl in a deck-chair at dusk, when he sees a women (Goenaga) undressing in the woods nearby. Going to investigate, he is stabbed in the arm by a man with a bandaged face, and flees to seek sanctuary in a nearby house. There, he meets a scientist (Iciarte) who tells him to hide inside a machine. When Hector comes out, it’s now broad daylight: the device actually sent him back in time about ninety minutes, as is proven when he sees himself sprawling in the deckchair outside his house. The scientist explains that he now needs to make sure his predecessor follows the same path in time, and gets into the machine, as otherwise, who knows what will happen? Of course, actually getting things to happen as they should, is quite another issue.

While far from the first film to use time-travel as a device to drive the plot forward, I enjoyed the way this embraced the idea of temporal paradox, rather than shuffling its feet nervously, and staring at the floor while mumbling something. A bit like Night of the Living Dead, the movie is completely unconcerned with the mechanics of the situation, the hows and the whys of time-travel, just in how a normal man would react to and cope with being dropped in an entirely abnormal situation, and Elejalde’s performance holds the film together well. The events, abnormal as they initially appear, have a well-grounded rationale behind them, and it’s a lot of fun to work out how things are unfolding as we go through events beyond the first time. If it perhaps careers somewhat out of control down the final stretch, the movie just manages to cling onto the rails, and concludes with a shot that is perhaps not so far from where it all started. A satifyingly-complex brain-teaser that kept us engaged the whole time.