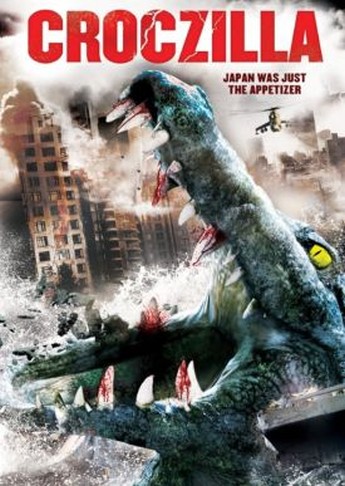 If you ever need proof that stupid monster movies are not the sole province of the SyFy channel, look no further than this dumb piece of schlock from China, which pits a whiny handbag maker, Wen Yan (Hsu), recently returned from Italy, against small, disobedient child Xiaoxing (Ding), in a battle to see which can be more annoying and irritating. I’m inclined to call that one a score-draw. Oh, there is also an eight-meter crocodile, which escapes from the restaurant to which it has been taken, after being sold by its reluctant zoo-keeper, Liu (Shi). It’s up to the former owner, and a local incompetent cop (Tao), who is also the kid’s father, to stop the reptile before it munches its way across the countryside to the big city on the far side of the lake [and I should warn you: nothing at all close to what’s depicted on the cover, right, actually takes place]. Fortunately, along with swallowing Wen Yan’s life savings, it also chewed down on her cellphone, so the authorities can use the GPS to track it down, as and when necessary to the plot.

It probably says something that the croc is the most three-dimensional creation in the film, and technically, this isn’t bad at all. Sure, you can sometimes see the edges, but in general, it’s an impressive creation which looks monstrous enough for the job – helped by the fact that there is no radiation, steroids or other abnormal growth, it’s just a big, nasty critter [and not too far a stretch; a Phillippino croc over six meters long, died in captivity last year]. Unfortunately, there is way too much human footage here, and it’s not long before you’ll find yourself rooting for the monster: even here, you’ll be disappointed, as the body count remains disappointingly low. It’s clearly intended mostly as a comedy, and the majority of the laughs really don’t translate, unless you find small-boy genitals intrinsically amusing. Hsu’s shrieking about her money, in particular, outstays its welcome very quickly, and you are left to yearn for the subtle comic subtleties of Oliver Platt and Brendan Gleeson, exchanging homophobic barbs in Lake Placid.