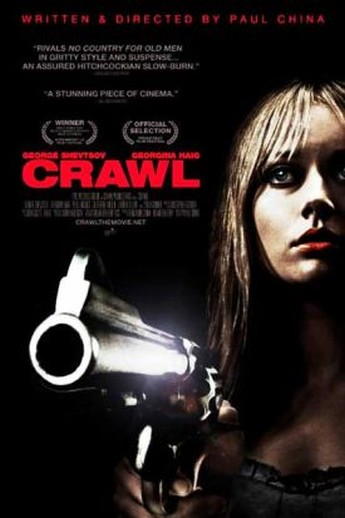 Rarely has a film’s title been more appropriate. Because this one certainly does crawl along, with the characters involved apparently incapable of moving with more urgency than a sloth embedded in treacle. Shamelessly ripping off at least two Coen Brothers’ movies – Blood Simple and No Country For Old Men – without a fraction of the same sense of style or cinematic eye. The story focuses on Slim, a sleazy bar owner (Holmes) and part-time gangster, who hires a Croatian assassin (Shevtsov) to kill a local garage owner who has been refusing to pay up on a debt. However, the killer appears to take a fancy to one of Slim’s barmaids, Marilyn (Haig) and when he runs into – literally – her boyfriend on the way out of town, decides he might as well pop round and pay her a visit for a spot of R&R.

The pace at which this unfolds is clearly aiming for “stately”, but ends up a great deal closer to “turgid”. Witness the early scene where Marilyn hears a bunch of noises around her house, and investigates, with all the energy of an unenthusiastic member of the walking-dead. At least the killer has age as an excuse: I almost expected him to pull a Zimmer frame out of the back of his car, he was that sluggish. Not the kind of threat from which you need to run away – just amble off and you’ll be good. Mind you, that still seems in excess of what Marilyn can muster. What’s sad is, you can see the pieces in place for a potentially interesting and entertaining piece of suspense. It’s just that China’s efforts in his rookie feature, fall woefully short when it comes to the level of competent execution necessary to realize the potential. However, he didn’t apparently forget to include a spanking scene, which is so ludicrously pointless as to border on surreal genius, and appears present purely to explain the title. I can’t believe I’m saying this, but this is a film which would likely be improved with more corporal punishment.