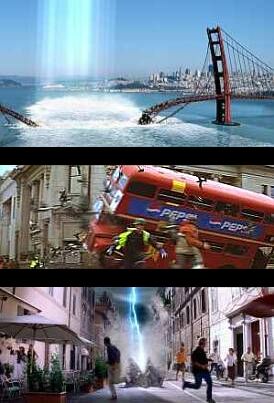 Not perhaps the best time to bring out a film about the threat of worldwide devastation (hey, we want that, we’ll watch CNN), least of all one which starts with the Space Shuttle having re-entry problems. Oops. Still, what you have here is an entertaining, if mindless and entirely predictable disaster romp, with the expected disregard for actual science. The earth’s core stops spinning, which is bad, and so we send a craft down to restart it with a multi-megaton defibrillator. The usual triumphs, disasters, heroics and traumas ensue before… well, I won’t spoil the ending by telling you whether or not the Earth is saved.

Thereby hangs the film’s main problem, in that there are absolutely no surprises. Before the mission started, we predicted which of the crew would live and which would die, and went 6-for-6. However, it does offer a look at something genuinely new – while there have been previous “burrowing” movies before e.g. At the Earth’s Core, they’ve been concerned more with what’s there than the sights on the way, and some of the visuals are excellent. Also, the characters are kinda fun (DJ Qualls as uber-geek Rat, with his love of Hot Pockets and Xena), and the writers have done their research: Fortean Times gets a nod, and Project Destiny sounds very much like HAARP turned on its head, right down to the Alaskan location. The comparisons are obvious, and justified: not as good as Deep Impact, but certainly an improvement on Armageddon.