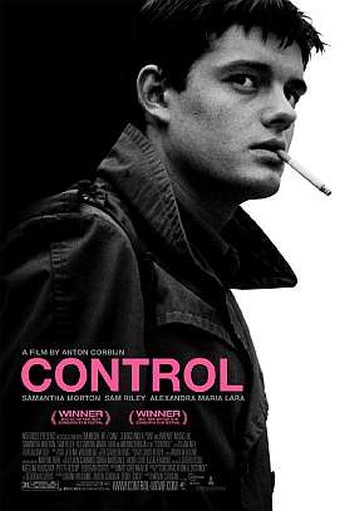 Two hours of black-and-white Mancunian depression, ending with the lead character hanging himself. Hilarity ensues, as they say. That’s somewhat unfair; albeit only somewhat, as this biopic of Joy Division lead singer Ian Curtis doesn’t really tell anyone who grew up in the 80’s, anything new. His long-suffering wife (Morton) comes over more as saintly martyr than anything, a portrayal which finally makes sense in the end credits, when you realize she was both a producer and the movie was based on her book. While not perhaps proving a bias, I am inclined to treat the portrayals with some scepticism. Must say, in Riley, noted pop-promo director Corbijn has found someone who is basically a doppelganger, particularly on stage, where Riley has the look and mannerism of Curtis spot-on, to an almost eerie degree. The film follows his life from a teenage fascination with David Bowie, through his joining Warsaw (who then mutated into Joy Division), struggle with epilepsy, depression and a marriage that might have been too much, too young, culminating in his suicide on the eve of the group’s first American tour.

The film has no problem with the darker side of things, and does a good job of capturing the sense of claustrophobia which drove Curtis to a place where there seemed to be only one way out. What’s missing almost entirely, however, is any real explanation of why Curtis bothered to go on stage at all, if it was such a traumatic experience for him. Going by the film, he’d have been better off abandoning the music business and sticking to work in the job center, which at least seemed to offer a certain degree of fulfillment. The allure is notable by its absence, and the tone of things as a whole is just so damn depressing. Yeah, I know: what did I expect from a film about one of the most depressing bands of all time? The only somewhat lighter moments come courtesy of Joy Division’s manager (Kebbell), whose no-nonsense approach is a breath of fresh air, in a movie that otherwise needs to stop moping around its bedroom and get out of the house a lot more.