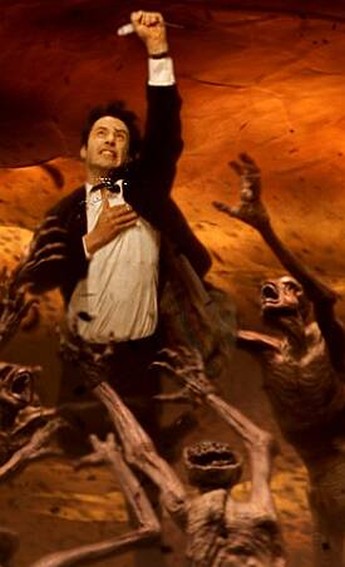 Hellblazer was one of the first comics I read, back in 1987; I still have the first forty issues in a box in the closet. So this perhaps colours my impression of the movie somewhat, and certainly contributes to my disappointment, for Reeves is not who I imagined as Constantine, a cursed, terminally-ill demon-slayer. Instead of the sociopathic anti-hero loner in the comics, we get a slightly-tormented, mild-mannered version – it’s like the difference between James Bond in the books, and James Bond as portrayed by Roger Moore; Constantine even has a “Q”, beavering away in the back of a bowling alley. A lot of it isn’t Reeves’ fault, but that of a script which is the typical Hollywood toning-down of any edgy source material; the shift from Britain to Los Angeles is only the start.

And this is a shame, since the film has a great visual style, with a number of moments to make you go, “Whoa!”, in an appropriately Neo-like voice. The problem is more a storyline that feels it has to hurl everything it cam find at the screen: God, The Devil, Gabriel, trips to Hell, the Spear of Destiny, and as a result, some of the more interesting angles (such as the Spear, which appears also to act as the Ultimate Airbag) get lost in the melee. I’m also unconvinced by the concept, necessary to the plot, that a failed suicide attempt, irrevocably commits the attemptee to eternal damnation. I guess the Catholic Church must have closed the confessional loophole. Overall, this isn’t wretched, but it is neither a great adaptation, nor even particularly worthy on its own.