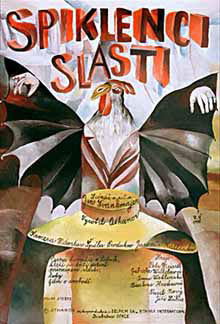 [20] Possibly the downright strangest feature film I’ve seen, Svankmajer’s third feature is almost entirely live-action, only the final quarter explodes into the sort of warped animation for which he’s famous. You want high-concept? Try this: “six people have a wank”. Any further description is futile, and it’s the world’s most un-pornographic sex movie. If there is a theme, it’s “different strokes for different folks”: one guy pretends to be a chicken, a postwoman snorts bread balls, a TV newsreader gets her feet tickled by carp. It all loosely ties together, despite the lack of dialogue, and I can’t fault the imagination on view, which is often very funny in a dreamlike way. Not so sure that it works on a more intellectual level, and despite having the long-term impact of a pop promo, it remains a refreshingly bizarre change.