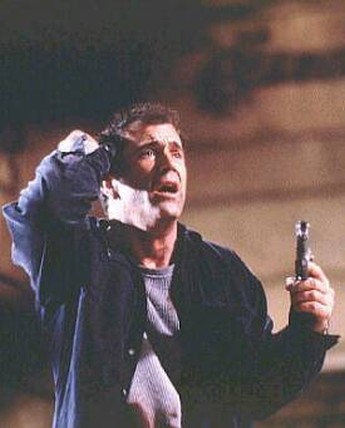 Speaking as a card-carrying conspiracist, I have mixed feelings about this one. On the plus side, Jerry, the New York cabbie who is the central character, is played by Mel Gibson, which is at least sympathetic casting. On the other hand, he plays it all twitchily psychotic and on the verge of loony – if you’ve seen Gibson in Hamlet, you’ll know what to expect – which is scarcely flattering. I also note (at the risk of spoiling it) that the government comes out smelling of roses, since the villains are independent. Of course, this is entirely accurate, since no politician ever takes part in any kind of conspiracy, do they?

What pleasures does this offer for the less paranoid, who won’t be freeze-framing in the hero’s apartment to read the stuff tacked to the wall? You get Roberts as the Department of Justice lawyer, dragged into Jerry’s net as at least some of what he says proves too close for comfort to those involved, led by Dr. Jonas (Stewart). Together, they go on the run, trying to find out what’s really going on, and stay alive. The conspiracy angles quietly evaporate in favour of a more straightforward goodies vs. baddies approach, and while Roberts is good as a lawyer, credibility is strained once she starts bashing FBI agents over the head. Still an entertaining action-romp, but largely a waste of the potential for really screwing with the audience’s head.