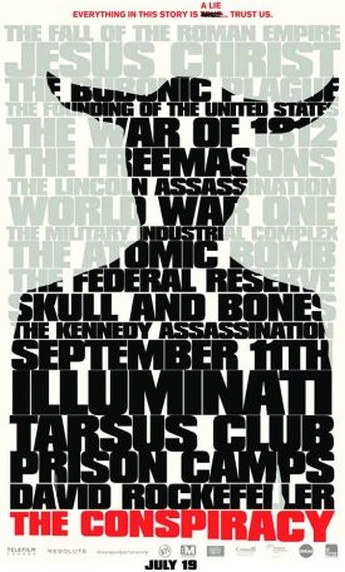 Aaron (Poole) and Jim (Gilbert) are making a documentary, focusing on a local conspiracy buff, whose home is wallpapered with newspaper stories, and who also takes his theories to the streets, with a megaphone. Then their subject disappears, leaving behind only his clippings; Aaron takes over the task, trying to make sense of the convoluted maze of dots, string and timelines. The trail eventually leads him and a sceptical Jim to the Tarsus Club, a rural retreat where the rich and powerful get together. This appears to have ties to the cult of Mithras, an ancient deity going back to Babylonian times, and there are seemingly links to many of the major events in world history, which have taken place shortly after the club’s meetings. With the help of shadowy journalist Mark Tucker (Clayton), the pair infiltrate one of the meetings, but are singularly unprepared for what they discover there.

There’s no doubt that the makers know their stuff, with the Tarsus Club obviously inspired by the goings-on at Bohemian Grove, which have been the subject of much paranoid speculation. It’s better when they stick to the plausible elements, with a good grasp on conspiracy culture, from both sides of the tin-foil fence, and incorporating real-life footage, such as George Bush proclaiming the new world order. It’s particularly effective at capturing the sense of something going-on below the surface, and the inter-connectedness which you start to find (whether it’s actually there or not); just about everyone depicted, are characters whose types we have met. The latter half drifts off more into horror territory, and to anyone who knows the work of Edward Woodward and Christopher Lee, you’ll know where this is going a long time before it gets there. Still, it remains an enjoyable ride, and was convincing enough in its mockumentariness to leave the control group, i.e. Chris. somewhat uncertain as to its status.