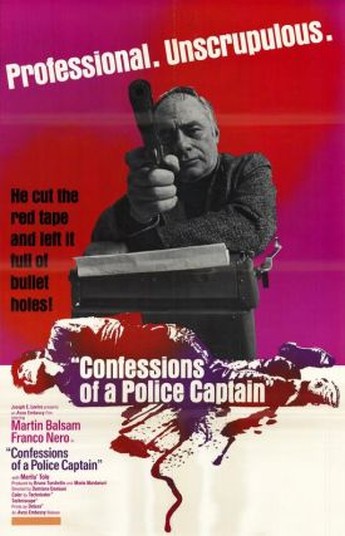 The captain of title is Bonavia (Balsam), who has been striving for years to put away ‘Teflon Don’ Ferdinando D’Ambrosio (Catenacci), but has grown steadily more disenchanted with the judicial system. He eventually arranges for the release of a man whom D’Ambrosio has had committed, knowing full well the man will immediately try to kill the mobster. The attempt fails, but several henchmen are killed, and Assistant D.A. Traini (Nero) is brought in to handle the investigation. It’s soon clear that, while both men have good reason to hate D’Ambrosio, they have vastly different, and largely incompatible, ideas about how it should be carried out. Both suspects the other to be in the pay and pocket of their target, and this lack of trust leads them to spend their time bickering with and investigating each other, while the real criminal laughs it up with his pals.

Which is, I suppose, the point – showing how an atmosphere of paranoia and mis-trust can poison the most ethical forces of law enforcement, rendering them ineffective. But entertaining though the sequences of the two verbally fencing are, I kept having to repress an urge to yell at the screen, “He’s over there!” to try and get them back on the right track: going after D’Ambrosio, not each other. It’s more than slightly talky, and while I certainly cannot deny the decent performances from the two leads, they don’t entirely compensate for the lack of excitement present in the script. Two guys bickering while the real villain sniggers and points at them, is not really the stuff of which great cinema is made.