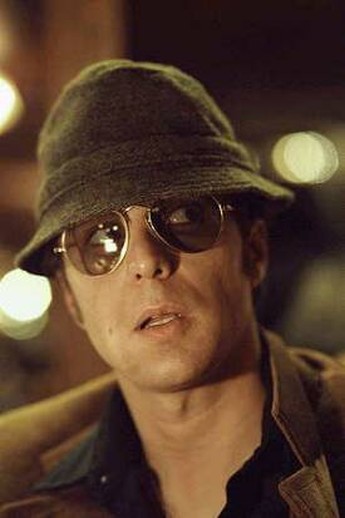 Chuck Barris is probably hardly known outside the States, so like Man in the Moon, this one might not fly outside the US. He’s a game show producer (Blind Date is based on his idea), most infamous for hosting The Gong Show, a parade of truly naff talent which still managed to give Mare Winningham her first break, funding a trip to summer camp where she met Jennifer Jason Leigh. But that’s not important here; what is, is Barris’s claim to be a part-time CIA assassin. That forms the core of the movie, along with his relationship to his handler (Clooney) and other agents (Roberts and Rutger Hauer).

The film plays it almost totally straight, but you can’t help suspecting this aspect is entirely a figment of his deranged imagination, which makes it much harder to buy into the movie. And if you discard those elements, what you’re left with is not much more than a deranged, sex-crazed TV executive. His descent into madness is nicely handled, most notably during a taping of The Gong Show where he pulls a gun on a guest, and would perhaps have been enough for the focus. The spy stuff too, has its moments, not least the final encounter between Barris and the agency mole. However, the combination never quite seems to gel. Rockwell still deserves credit for an effective portrayal, and the rest of the cast are in no way inadequate – it’s just a shame there’s not quite enough to hang from these performances.