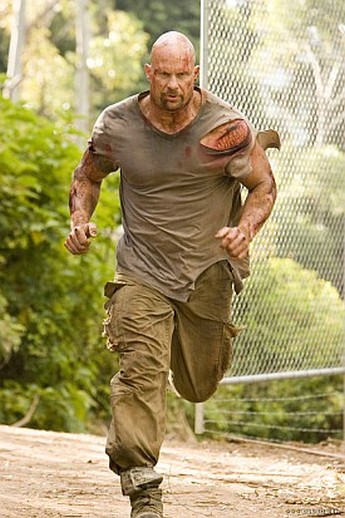 I am thoroughly unconvinced about a movie that preaches about the dangers of presenting violence in entertainment…produced by WWE Entertainment, starring one of their biggest names and containing enough entertaining violence to justify its R-rating. Given the billions the company has made playing basically to the same audience who would tune in for televised murder, that seems far too much like Oliver Reed telling me to drink responsibly. This film would have been a good deal better had it abandoned all such moral pretenses and, rather than tut-tutting disapprovingly, had gone balls-to-the-wall with its premise: “Toss ten death-row inmates onto an island, and let them kill each other. Now, isn’t that fun?” Instead, we get Jack (Austin), who was on a government mission when arrested, and so is really a good guy [interfering in the affairs of sovereign nations be damned!] with a conscience ‘n’ all; it’s inevitable that he is going to end up battling McSweeney (Jones), the cartoonish British psychopath and also taking out the producer (Mammone).

Even that could have been okay, save for the addition of various unwanted subplots, which we could easily have done without, and often don’t make sense on a logical level. For example, the Feds can’t locate the island: so why not ask the journalist, who went there and interviewed the producer for national TV? There’s also Jack’s girlfriend, whose role is apparently entirely to watch the show in bar, and cheer when he kills people. At 113 minutes, it’s 25 minutes too long, largely as a result of these redundancies. What we did enjoy thoroughly were Austin and Jones, both hard men playing hard men, and the script, wisely, doesn’t challenge this. Though if director Wiper wants to helm more than one feature every seven years [his last was back in 2000], then he’d better learn how to film action, as that aspect is poorly-shot and badly-edited. Austin has a future in the genre; let’s just hope Wiper doesn’t.