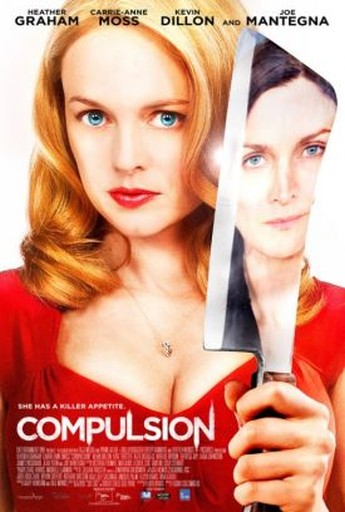 This remake of Korean film 301, 302 has Graham as wannabe food-porn presenter Amy, who is obsessed with cooking, to an extent that eventually drives her boyfriend and sponser, Fred (Dillon) into the arms of one of his workmates – he just wants meat and potatoes. In the ensuing emotional carnage, Amy befriends her neighbour across the hall, Saffron (Moss), an actress who used to be somebody, but is now struggling to get the roles she wants, as age takes its toll. Saffron is not exactly forthcoming: in fact, she does just about everything she can to shut the wannabe friend out, but the persistent Amy won’t take no for an answer. Gradually, the two do bond, but it turns out that Saffron’s past is even more damaged than it appears. There’s a pretty good reason the story is told in flashback, with a detective (Mantegna) interviewing Amy regarding the disappearance of the resident from across the hall.

Full disclosure: I haven’t seen the Korean version, so can’t compare that. I would, however, hope it was a little more even in tone. Pretty much all we knew going in was from the trailer, which is a significant piece of misdirection; the ending pretty much comes out of nowhere and is more hinted at than made explicit, to the extent that Chris was uncertain as to what was supposed to have happened. There’s a pretty clear connection being made between food and sex: Fred eats Amy’s cooking, then eats Amy, right on the table (allowing Saffron to see, courtesy of a convenient window, the kind of which, I must admit, I haven’t seen in any apartments I’ve ever visited). That’s about the level of wit you get here, though Graham’s performance, as she practices her show in front of an imaginary kitchen audience, is almost as indistinguishably hammy. Moss, as the severely-damaged Saffron, comes off somewhat better, but the relationship between the two is never convincing, which largely explains why the ending makes little or no sense. Less of a gourmet meal, and more like warmed-up leftovers.