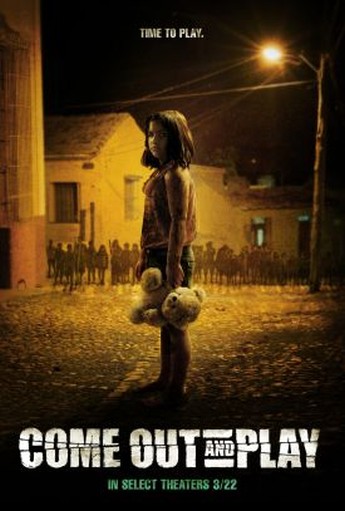 Based on the same novel as 70’s Spanish film, Who Can Kill a Child?, this is the story of Francis (Moss-Bachrach) and Beth (Shaw), a couple on holiday in Mexico who rent a small boat and take a trip to a remote village. On arrival, it’s very quiet: too quiet, in fact, with no-one to be seen except for a bunch of the local kids playing on the dock. They find a hotel, but it is no less deserted: as Beth is heavily pregnant, Francis leaves her there and goes out to try to find anyone old enough to vote. The good news is, he does. The bad news? They’re being dragged away, to be treated as a human piñata by those kids, who then proceed to chew down on their victim. Turns out that something has turned all the children in the village simultaneously psychotic, and they’ve targeted every single adult for elimination. The couple do find a local (Cacho) who can fill in some of the blanks, but with not enough gas for their boat to make the return journey, their options are pretty limited.

The main problem here is a plot which requires the central pair to be completely oblivious to what’s going on, for far longer than any sensible person would be. If I showed up to a village with no responsible adults to be found, I’d be out of there in a flash, rather than hanging out in a bar, then moving to a hotel, and exploring people’s homes. While I know it’s an attempt to generate atmosphere of brooding menace, the audience is so far ahead of the characters – Chris was literally yelling, “Get out! GET OUT!” at the TV screen – they need to cut to the chase, and reach the meat (is murder) of proceedings a great deal quicker. Once it does get there, things improve, though I’d have like to have seen more actual child-killing: it’s mostly implied here, which seems a cop out, and definitely diminishes the impact. Obviously made fairly cheaply, and with a limited cast and crew, it skates on the thin ice of failure, though never quite falls through. The cracks are pretty obvious, however.