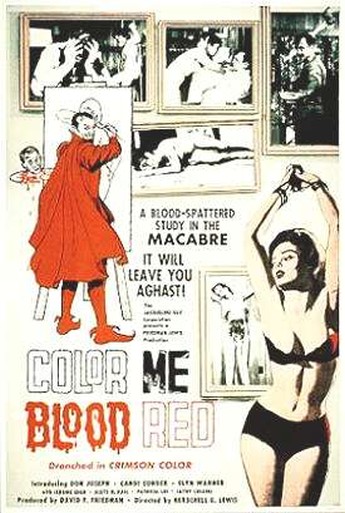 Lewis’ third entry into the gore genre fails, largely because it breaks the cardinal rule of good drive-in movies: whatever else you do, never be boring. For this is extremely dull. Unlike Fuad Ramses or Mayor Buckman, the villain at the centre is no fun to watch at all, and the gore is nowhere near the volume or intensity seen in its predecessors. The premise is not dissimilar to A Bucket of Blood: Adam Sorg (Joseph) is a mediocre artist who discovers, by accident, that when he paints with human blood, his critical reception is much kinder.

Potentially, this could lead to copious amount of splatter, but doesn’t, thanks to an extremely tedious subplot about a bunch of teenagers having a beach party; one encounters Sorg and is talked into “posing” for him, a decision which naturally puts her in peril (though we learn it is probably a bad idea to leave loaded guns lying on your mantelpiece). There is only one scene which will cause even the slightest reaction – I’m still trying to work out what part of the body Sorg was squeezing, to get his “paint” out. Otherwise, the trailer is comfortably the best thing about the film, with its frequent repetition of the title, and classic tagline, since adopted for many an exploitationer, “Keep reminding yourself: it’s just a movie.” If the truth be told, “it’s barely a movie” would probably be closer to reality.