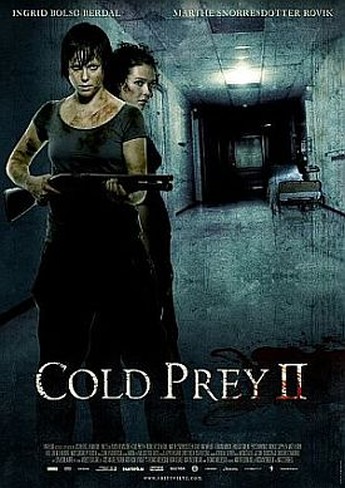 This follow on almost directly from the original, with sole survivor Jannicke (Berdal) taken to a hospital that’s just about to close, and is down to a skeleton crew of just a few staff, to care for the remaining handful of patients. The police go to the scene of the crime, and recover the bodies of her friends and the killer from the crevasse where they were last seen. But it turns out the psycho was not dead, and the cold temperature kept him alive, in a state like suspended animation. Back at the hospital, over the understandably vociferous protests of Jannicke, he is revived. The authorities are stil trying to sort out what happened, and only have her word for it with regard to who’s the killer, so she is sedated and handcuffed to her bed. By the time she wakes, the inevitable has happened, and she’s right back to the situation from which she escaped, a few hours previously: up against the parka’d psychopath, with whatever weapons come to hand.

The strengths and weaknesses of this are almost the same as the original: it’s absolutely nothing new or original, but Berdal makes a good heroine, and it’s done with enough energy as to overcome the familiarity of the source material. This is likely fractionally more successful: Stenberg has a better handle on the tension, and there are some really good scenes which amp this aspect up to the max. The hospital setting is well-used, and there are some good kills too: the one on the staircase is likely my favorite, where the victim has his neck bent back to an angle entirely incompatible with ongoing life. That drew an involuntary “Whoa!” from both Chris and myself. There’s a moment towards the end, where it seems like the film is going to go in an entirely new direction, with the hunter becoming the hunted [hell hath no fury like a woman scorned – particularly when the woman has a snowmobile and a shotgun], and it’s a shame it doesn’t. However, the results are still among the better entries of its kind, and we look forward to the third part, which seems inevitable, despite the conclusive way this one ended. We’ve seen all the Friday the 13th movies. We know how it works…