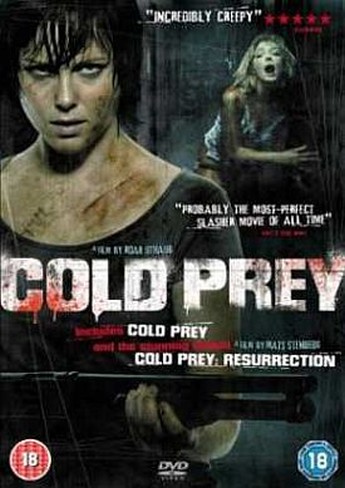 Five young snowboarders head off to the remote backwoods for some sport off the beaten track. That comes to a sudden end when one of their number cracks a limb, necessitating them holing up overnight in what appears to be a long-abandoned skiing-lodge. The key words there are, of course, “appears to be.” For it’s not long before the visitors start to realize that they are not alone in their refuge. And the more they discover about the lodge and its parka’d, ice-axe wielding inhabitant, the more they realize the peril into which they have wandered. That’s especially true when considering factors like the steadily-shrinking set of options they have for action, their wounded party member, the remote location and (naturally!) complete lack of cellphone coverage.

That’s close to all there is here. It’s extremely bare-boned as far as plotting goes, with little or no background on the killer [which may be for the best, since what there is, is pretty implausible], and there’s nothing in terms of the story here you haven’t seen before. It’s a slasher film, with no self-awareness, and as such, in some ways feels about thirty years past its sell-by date. However, it is put together with some energy, and – especially having sat through all dozen Friday the 13th films recently – it’s refreshing to see characters with whom you wouldn’t actually mind spending time. Jannicke (Berdal), in particular, is a cool and composed heroine, who won’t back down, when all around here have turned and fled (or died). It really shouldn’t be a spoiler to reveal that she makes a good “final girl,” and if there were few if any surprises, I still found myself anticipating the sequel more than I thought I would.