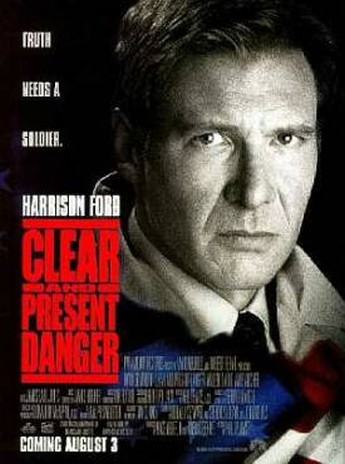 Less successful than the first two Clancy adaptations, largely because this stays in territory that’s rather too familiar. It’s also strains credulity to have the CIA deputy director running around the Columbian jungle, like Arnold Schwarzenegger after too many mocha frappuccinos. Even the tech is flaky: if you’re reading a file on someone else’s computer, and they delete it, does it really vanish from your screen too? And hey, compared to “World War III” and “terrorists want to kill your family”, I just can’t get worked up about the war on drugs. Chuck in a highly cynical terminal-illness-of-the-week subplot, and you’ve got something distinctly ordinary – at 145 minutes, it’s lengthily mediocre too.

Jack Ryan (Ford) gets embroiled in the cover-up of a paramilitary operation in South America, after drug lord Escobedo (Sandoval) kills a friend of the US president – that said friend was laundering money and swindling the drug lord are rapidly glossed over as irrelevant. Ryan stumbles across this while tracing the path of the swindled $650m, but as usual, things escalate out of control until he is rescuing the remnants of our forces in true Rambo-style. The only parts that are effective are the political shenanigans, with Czerny good as another deputy director whose slimy underhandedness is the very opposite of Ryan, who makes the streets of Bogota seem like a company picnic compared to the halls of Washington. But it’s not enough to overcome a sad surfeit of leaden gun-battles.