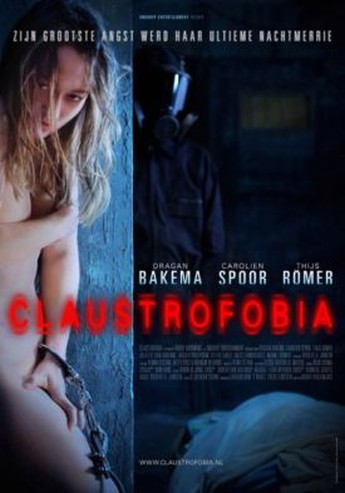 A young boy and girl climb into an abandoned hospital, and as a prank, the girl tricks the boy into being trapped in an abandoned mortuary. Turns out it’s three days before he’s found and the impact… Well, we’ll get to that. Fast forward a good number of years and Eva (Spoor) is regretting her course of study as a vet, because of the animal dissection. Still, she got a smoking deal on a great apartment, after the previous inhabitant did a runner. Sure, the landlord is a bit creepy, and there’s a guy across the way who just stares across to her window the whole time, but there’s a nice doctor (Bakema) living in the building too. Except, one night, she wakes to find herself chained to a metal bed in an underground room, and a guy wearing a gas-mask is bringing her food. Never a good sign. And it doesn’t take much to draw a connection to the prologue, though it’s not quite what you’d expect. The situation attracts the attention of both the landlord (Philipoom) and a police officer (Romer). but her captor is not going to give her up easily.

We watched this on the heels of Urban Explorers, and by comparison, everyone in this film is a fucking Nobel Prize winner. People behave sensibly not in ways painfully necessary to the plot, and its surprising how much this helps. Also a big positive are supporting characters who have character, such as the landlord and the cop, who both come alive beyond the obvious archetypes they are. Indeed, to some extent, they’re almost a distraction, especially as any significant development of Eva more or less ends with her capture [the whole vet thing never amounts to much]. However, it keeps the twists coming, eventually looping around to join the dots: as usual for the genre, it does require some stretch of the imagination to buy in to the scenario, though it’s an effort we were willing to make. Between decent performances, crisp direction and a far-better facsimile of intelligence than you usually get, this slice of Dutch cheese is pretty tasty.