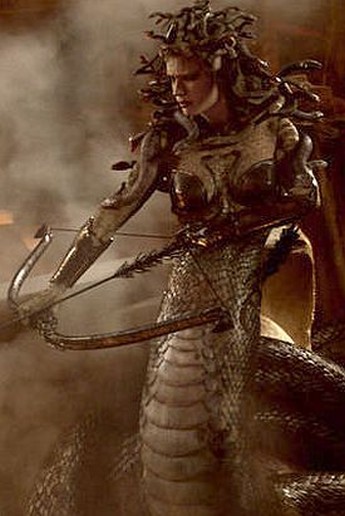 I was expecting something pretty bad here, but I’ll confess: I was entertained, at least as much as I’d expect to be, by any retelling of Greek legenf brought to you by the guy who directed The Transporter. Instead of Jason Statham as Perseus, we have Sam Worthington, whom we know and love from his role in Spartacus: Blood and Sand, so we’re happy to see him kicking ass with a sword. He’s a demi-god, the illegitimate son of Zeus (Neeson), called into action when the gods of Olympus get upset after humanity decides it can do without them, and threaten to unleash hell, in the form of the monstrous Kraken. To defeat the beast, Perseus must first find out its weakness – not exactly a simple process – then acquire said artefact, and finally wield it before the Kraken chows down on a light snack of Grecian princess. Along the way, there’s giant scorpions that spring from the blood of an enemy, the snake-haired Gordon, and Hades. Good job he’s got Io (Arterton) to keep him well-informed about who’s who and what’s what, in the role of Basilina Exposition.

This is, of course, complete bollocks. But those who complain that the remake is not a patch on the 80’s version, are forgetting something: that it, too, was complete bollocks. And I don’t mean that in any disparaging way: both movies are popcorn entertainment, without ambitions to be any more. And, in both, half the fun is to be had in mocking proceedings as they unfold; here, not least because most of the cast is more familiar from somewhere else. We ended up referring to Perseus as Spartacus, Hades as Voldemort, Cassiopeia as Clarice – plus, for obvious reasons, Io as the lost Greek goddess, Wikipedia, adding “Citation needed” to the end of all her sentences. Still, as a visual spectacle, those scorpions are pretty damn cool, and the Kraken at the end is equally impressive, though seeing the Gorgon just made me think of Monsters, Inc. I also appreciated the sly anti-religious message inserted into the war between men and gods, which I don’t recall from the original [mind you, given how old I was when I saw it, that’s not surprising!]. As cinematic spectacle, this is perfectly fine.