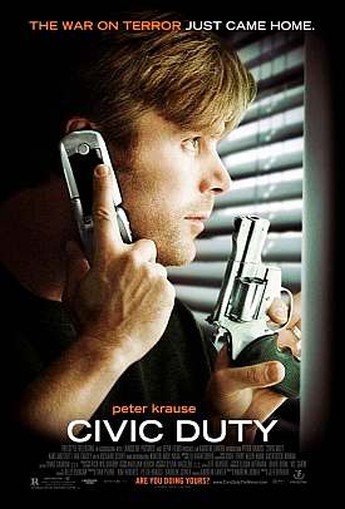 Just because you’re paranoid doesn’t mean they are not out to get you. That could be the tagline for this film, in which unemployed accountant Terry Allen (Krause) becomes suspicious of his new downstairs neighbour, Gabe Hassan (Naga). Is he the innocent grad student he claims to be, and as Terry’s wife (Matchett) believes is the case? Or is he part of a malevolent plot? Terry reports Hassan to the FBI, but the agent assigned to the case (Schiff) is overworked and hamstrung by bureaucratic niceties – like the US Constitution – so is largely dismissive of the suspicions. So Terry opts to take matters into his own hands, and when he finds the door to Hassan’s apartment left ajar, seizes the opportunity for some detective work of his own. Are his fears founded in reality, or simply a paranoid by-product of too much cable TV news, and its relentless coverage of the potential for domestic terrorism?

A nicely-constructed exercise in even-handed practical conspiracy, you’re never certain until the final scene on which side of the divide this is going to fall – and maybe not even then. In isolation, each of the incidents involving Hassan e.g. his spartan lifestyle, late-night trips to the dumpster, etc. would be harmless enough. But when put together, and seen by a mind primed by the fear-mongering tactics of the mass media, the results are explosive. The film makes a good attempt to portray Terry’s descent, triggered in part by getting laid off at his job, an aspect which links this to Falling Down. It isn’t entirely successful – there’s too much a leap to what he knows is illegal – but is likely good enough. Krause is plausible in the central role, and while reminiscent of a stage play more than anything cinematic, it is a real conversation-starter of the film. Would you behave as Terry did, if you felt the authorities were ignoring you? Would you behave like his wife did? Interesting stuff, to be sure.