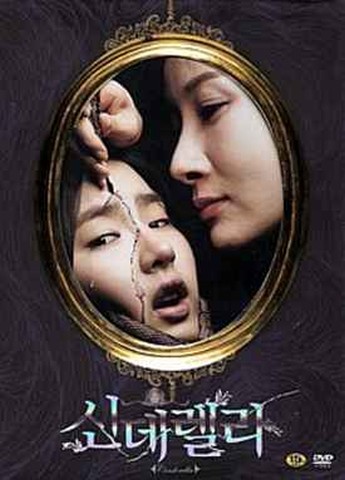 There’s ten minutes, roughly in the middle, where this actually makes sense. The first half has been an incoherent hodge-podge, of scenes that make it seem as if the editing of this film was done by a careless three-year old with some blunt scissors and crazy glue. What we can establish is this: Hyunsu’s mother is a plastic surgeon: great for all of Hyunsu’s friends, who pop round for a cup of tea and a nose job. But the surgery comes with after-effects, including hallucinations, paranoia and carving your own face up with any sharp object to hand. And why does Hyun-Soo not have any pics from her childhood? Were they really “lost during a move” as her mother claims? What’s in the out-of-bounds attic? And why is Hyunsu hanging out with her estranged father?

The answers to all these questions, and more, may be found herein. Or they may not, because after the film briefly comes up for a quick breath from the air of clarity, it goes right back to confusion of epic proportions. The main inspiration appears to be Italian giallo, where things happen that might be logical within the film’s world, but are laughably implausible in any real sense. That’s certainly the case for the main foundation of the story here; it’s so ludicrous, especially in a modern setting, I can’t help wondering how the pitch for this movie ever got the green-light. There’s also an uncomfortable switch of emphasis, with the plastic surgery theme prominent early on, then all but dumped. Some nice imagery isn’t nearly enough to save this from being a jumbled mess.