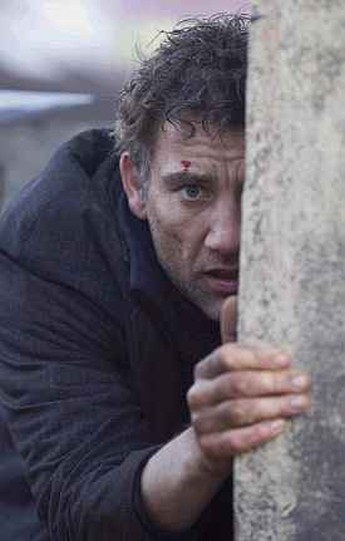 Not what I’d expect from the director of a Harry Potter film; near-impeccable SF-action with a brain, heart and almost every other organ too. Twenty years into the future, the human race has become sterile, and so is collapsing towards extinction – the UK has survived only through harsh immigration law. Theo (Owen) wanders around in an alcoholic daze, barely functioning; but then, a former flame contacts him, and he finds himself, more by bad luck than good judgement, embedded with what could be our last hope, the heavily-pregnant Kee (Ashitey). The anti-government “Fish” group want her for their revolution; the government want the Fish; Theo just wants a drink. But he’s also haunted by memories of his own, long-dead child.

Cuaron consciously goes counter to the hyperkinetic style of most action films, preferring languid editing, most notable in two phenomenal shots, each lasting several minutes. One depicts an ambush from inside a car, the other follows Theo through a battle into a building that’s being systematically gunned apart, in search of Kee. Either are a master-class in the power of not editing. Owen is, even by his high standards, excellent – Theo is absolutely no hero, but by the end of the film is acting like one, and it’s an entirely believable character arc. Michael Caine adds humour as a reclusive hippy, but the tone is generally very dark, and uncomfortably plausible. If you stick around for the end credits, over which Jarvis Cocker croons softly, “Cunts are still running the world,” you’ll know what Cuarón is trying to say.