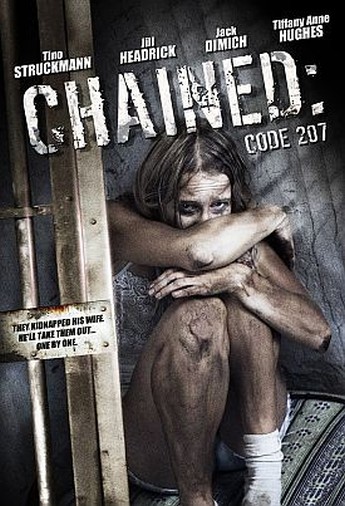 US soldier Mack Crawford (Struckmann) comes back from his tour of duty as damaged goods, but things are about to get a whole lot worse for him. Because Mack’s wife, Charlotte (Headrick) is abducted by a gang who specializes in white slavery. He finds the local cops are less than interested in the case, even though Charlotte is certainly not the only woman to have gone missing lately, and so it’s up to him to solve the case on his own, with nothing but a DVD copy of Taken for help. Ok, I made that last bit up. He locates the gang’s headquarters, a compound where they are holding the women, for display to prospective buyers, and launches a one-man assault to rescue the victims – that occupies more or less the final hour of the movie, so whatever its faults (and we’ll get to those), it can’t be accused of skimping on the action. The first one he frees is Tiffany (Hughes), who is as much a burden as a help in the mission, trailing around in Mack’s wake. It’s as if Brittany Murphy was still alive.

In case you’re wondering, 207 is the police vernacular for a kidnapping. So there you go. Struckman wrote, directed and starred in this, and does an okay, rather than impressive job. The writing is probably his strongest suit, with a mix of styles that’s probably inappropriate, but I still kinda enjoyed. For instance, Tiffany refuses to shoot anyone until Mack convinces her, with an admirably straight-face, that shot people just go to sleep for a few hours. It’s an insanely loopy idea, at complete odds with the grim nature of the central premise, though the film is rather too restrained in that department too: I mean a B-movie about sex trafficking with one boob shot? Sheesh. Mind you, I never knew the market for “homely” was, apparently, so profitable. Despite the presence of a couple of minor TNA wrestlers in supporting roles, the action is a distinctly-mixed bag – too often, not much more than the participants grabbing each other and staggering around like a pair of drunken sailors.

Still, things keep moving briskly enough to distract, with the villains suitably villainous, Crawford acceptably heroic, and Hughes pretty much steals every scene she’s in, helped by Struckmann’s deadpan reactions. If the script had concentrated on those two – maybe making them a father/daughter in search of Mom – it could have been a cult classic, though I imagine this is the kind of thing you can’t predict or expect. Instead, what you have is an undeniably low-budget actioner, made with more heart than skill, but which just about skates by on its energy.